He then parked car overnight in condo till next day, when he drove out and decided to burn it

For hours after she was killed on July 12, 2016, a 31-year-old woman's body remained in the front passenger seat of a car as it was driven around by the man now accused of murdering her.

The man later left the woman's body in the passenger seat until the next morning, with the car parked inside a Yishun condominium estate.

He then drove around aimlessly - with the body next to him - thinking of what to do until he decided to burn the body in the afternoon.

Leslie Khoo Kwee Hock, 50, who is accused of murdering Chinese national Cui Yajie, told the High Court yesterday - the fifth day of his trial - of what he did after he had strangled her in the front passenger seat.

He said he had also left his car in a different spot from his usual parking space at the Orchid Park condominium - with the seat lowered.

It also emerged in court that Khoo had no driving licence, even though he drove a black BMW that was registered in his wife's name.

Khoo, a manager in a laundry firm, was taking the stand for the first time to give his account of the events, and broke down at one point.

Khoo maintained he was not in a romantic relationship with Ms Cui, even though he admitted he had a "bad habit" of committing adultery. 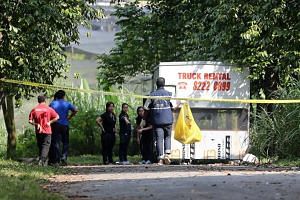 Gardens by the Bay murder trial: Victim wanted to bear her killer's child

Gardens by the Bay murder trial: Accused took police to where he burned body after speaking to wife, son

"I accidentally done (sic) something wrong. I do not have intention (sic), Your Honour," said Khoo, who was inaudible at times and had to be reminded several times by Judicial Commissioner Audrey Lim to speak into the microphone.

It is not disputed that Khoo spoke to Ms Cui on the phone on the morning of July 12, then started a conference call with his supervisor, and assured Ms Cui he would take her to meet his boss, which he never did.

The prosecution's case is that Khoo, who has a criminal record for cheating, intercepted Ms Cui and then silenced her to stop her from exposing him as someone who had cheated her out of her money. But Khoo said Ms Cui was angry at him for spending too much time at work, and she wanted to verify with his bosses if he was really so busy.

Ms Cui had told family and friends they were a couple though Khoo, who is married with a son, has denied that they were an item.

Khoo said that when Ms Cui, an engineer, got into his car at Joo Koon MRT station, she began cursing him to "die", while he kept quiet.

He said Ms Cui then changed her mind about meeting his supervisor, so he drove to Gardens by the Bay and parked near a roundabout. He said he tried to calm Ms Cui, who continued to scold and curse him.

He said she used something to hit his arm, and when he pushed her away, she attacked even more.

"We started to struggle," he said, as he began sobbing. "She shout, I shout, we struggle. I also don't know what happened, after a while, she don't (sic) move any more," he said, as his voice cracked.

He said he then realised his hand was on her neck. He tried to shake her and thumped her chest, but she did not move. He held his fingers in front of his nose to show how he checked if she was still breathing. The next afternoon, he decided to dispose of the body by burning it instead of burying it.

"I can't bury, I got no strength, so I decide to burn," said Khoo, adding that he "sent" her ashes into the sea a few days later. "I just want her to rest in peace. I prayed for her."

Defence plays videos to try to show victim was temperamental

Two video clips of engineer Cui Yajie yelling at the man who now stands accused of murdering her were played in court yesterday, as the defence sought to show that he had been provoked into killing her.

In one, Ms Cui appeared furious in a video call with Leslie Khoo Kwee Hock. She asked him why he posted photos of his wife - whom she believed he had divorced - but not of her on his Facebook.

In the second, Ms Cui was being filmed as she was going through her mobile phone. "Did I allow you to take a video of me?" she could be heard saying angrily.

The videos, recovered from Khoo's mobile phone, were used to support his assertion that she was a temperamental woman.

On the stand yesterday, Khoo maintained he was not in a romantic relationship with Ms Cui, even though he admitted he had a "bad habit" of committing adultery.

He said they were just normal friends and he had helped her to "repay her kindness" for handing him $20,000. The court had heard earlier that the money was for a purported investment in gold.

He called her Meow Meow and did not even know her full name, he said. She was always the one who made the first move, to ask him out for meals, to ask him to buy things for her, and he merely obliged as he was nice and wanted to help her. It was on her instructions that he delivered a gold chain, flowers and a birthday cake to her office on her birthday, he added.

Khoo said he agreed to accompany her to a company event with her and act as her boyfriend in front of her colleagues.

However, in cross-examination, Deputy Attorney-General Hri Kumar Nair called him a liar.

The senior counsel pointed to Khoo's police statements, in which the accused said that as the quarrels between them became more frequent, he repeatedly told her to leave him. Mr Nair noted that Khoo was telling her to break up with him. But Khoo replied that he never used the words "break up".

When Mr Nair noted that Khoo had proposed to Ms Cui, the accused said he was just "testing" her. Pressed further, Khoo said this was because she would tell him "strange things".

"The only thing strange is your answer," said Mr Nair.

Khoo added: "I am testing her because she asked me to buy things for her. I wanted to know what is her intention."

When Mr Nair also pointed out that Ms Cui wanted to bear Khoo's children, he dismissed this as a joke on her part.