A surge in the number of abusers of new psychoactive substances (NPS) drove up the overall arrest rate for drug abusers here last year.

A total of 343 NPS abusers were nabbed, compared with just one the year before, the Central Narcotics Bureau (CNB) said yesterday in its annual report.

The amount of drugs seized last year was estimated to have a total street value of about $6.65 million, a slight increase from about $6.63 million the year before.

NPS produces similar effects as controlled drugs such as cannabis, cocaine, Ecstasy, methamphetamine or heroin. In May last year, 25 NPS were listed as Class A controlled drugs, punishable under the Misuse of Drugs Act.

Methamphetamine was the drug of choice for most new abusers in Singapore last year, with cannabis in second place. Methamphetamine and heroin were the top two drugs for all users, comprising 62 per cent and 20 per cent of those arrested, respectively. 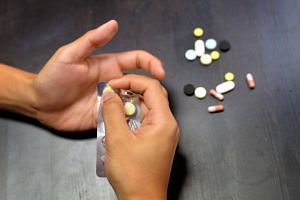 "In particular, the increase in NPS abusers was a result of sustained enforcement efforts targeting NPS abuse and enhancements in detection capabilities," CNB said.

He noted that the production and trafficking of methamphetamine had reached "alarming levels", and that the market for NPS was continuing to evolve.

"There is also a push in some countries for alternative, liberal drug policies," he said.

Data from last year's United Nations Office on Drugs and Crime World Drug Report showed that South-east Asia is one of the world's largest methamphetamine markets, and the second largest opium and heroin market.

Close proximity to such large-scale drug production regions places Singapore at a high risk of being a target for drug trafficking syndicates, CNB said.

Together with the police and Immigration and Checkpoints Authority, the agency conducted 19 islandwide operations targeting drug traffickers and abusers and 1,575 operations to foil drug smuggling attempts at the checkpoints.

Given the transnational nature of drug trafficking, cross-border collaborations remained crucial in tackling the issue.