SINGAPORE - In an attempt to throw off the invigilators, one of the students involved in the O-level examination cheating case surrendered a decoy phone at the exam centre before the start of five separate papers he took.

Zhou said that after giving up the phone, he smuggled into the exam hall another carefully concealed mobile phone attached to Bluetooth devices, which included skin-coloured earphones he wore. He received help with his exam papers through the earphones.

Zeus' principal, Poh Yuan Nie, 52, and two tutors from the centre are accused of helping Zhou and five other Chinese national students cheat in the exam in 2016.

Zhou, who sat his science practical paper on Oct 19, 2016, told District Judge Chay Yuen Fatt that he could not understand the questions which were in English. But he had the answers fed to him through the devices. Zhou said this in response to questions by Feng's lawyer, Mr James Chai.

"I only received one call but that one call provided me the answers for all the questions... I don't know if the answers were correct, I simply wrote them down," Zhou added.

The teenager testified that when he could not hear clearly, he would signal this by coughing.

He said: "The answers were given to me in a mixture of English and Mandarin... They would read out each word one by one and spell each word for me." 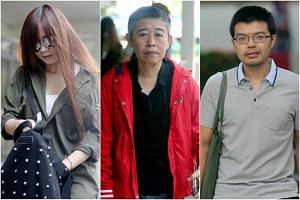 Student knew about cheating plan only on morning of exam

Zhou also sat for a mathematics paper later that month. When Mr Chai suggested that his client did not provide him with any answers for the mathematics paper, the teenager replied: "I disagree. There is a possibility."

On Monday, one of Zeus' tutors confessed to her role in the same elaborate plot to remotely feed exam answers to the six private candidate students.

Singaporean Tan Jia Yan, 32, had a camera phone stuck to her chest, concealed under her clothes.

Taking the exam as a private candidate, she used FaceTime to beam images of the paper to her accomplices at Zeus.

The accomplices then supplied the answers to the students. The six students embroiled in the exam cheating scandal were referred to Zeus by Chinese national, Mr Dong Xin, 30.

According to court documents, Mr Dong and Zeus had signed contracts stating that for every student he referred to the tuition centre, Poh Yuan Nie would receive a deposit of $8,000 and $1,000 in admission fees.

The money was to be fully refunded if the students fail the exams.

Tan, who pleaded guilty to 27 cheating charges, will be back in court on May 15.

The pre-trial conference for the cases involving Feng, Poh Yuan Nie and Fiona Poh will take place on April 26.