SINGAPORE - The new State Courts Towers has moved closer towards completion with the launch of its superstructure - the part that is above ground level - on Friday (March 17).

In his address during the launch, Justice See Kee Oon, Presiding Judge of the State Courts, said the existing building has served well for the past 42 years but is unlikely able to support the long term demands of the courts.

He added: "To ensure that we have the necessary facilities and infrastructure to address our projected needs, expansion plans were made and the blue print towards the construction of the new State Courts Towers was mapped out around 2011."

The State Courts said the new towers will allow the courts to have the capacity to meet its future needs and support it towards an efficient, effective and responsive judiciary.

Time-lapse of the construction of the new State Courts Towers

Its spokesman said: "The State Courts handle 90 per cent of Singapore's case load which equates to more than 300,000 cases per year, and we expect the number of cases to increase as the Singapore population grows. 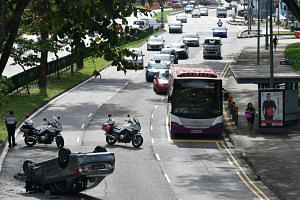 "With the increase in the State Courts' jurisdiction and case load over the years, and the introduction of new functions to better serve our court users, the current building is well beyond its original capacity."

The State Courts Towers - built at a site that used to be an open car park in front of the current State Courts building - will be 178 metres tall and have three basement levels.

The ground-breaking ceremony of the State Courts Towers was held in May 2014 and it is expected to be operational from 2020.

After this, the current State Courts building will be retrofitted and the Family Justice Courts will operate there from 2023.