Minister gives them assurance, tells them to be confident in discharging their duties

Law and Home Affairs Minister K. Shanmugam assured police officers yesterday at the annual Singapore Police Force workplan seminar that they can discharge their duties confidently because their leaders in the Ministry of Home Affairs (MHA) and the police force would stand by them.

Addressing about 1,000 officers who attended the seminar yesterday, Mr Shanmugam said it is the Government's job to propose legislation, carry it and make necessary assessments.

"You just do yours, and you will get the full support," he said, reassuring officers that the MHA and police force would stand by them.

In the same vein, if things go wrong operationally, it is the minister who will be accountable and responsible to the public, he said.

There has to be internal accountability, he added, and the relevant leaders will need to ensure mistakes are not repeated.

"That is my approach... And the (uniformed) services need to know that very clearly. So that you can go about your work confidently, and do your duty, and have faith and trust in the system. That is what is asked of you. Leave the rest to us, and be assured that we will answer the questions and shield you from political attacks."

He cited a 2016 ministerial statement he gave in Parliament when concerns were raised about investigation processes when handling young suspects, following the suicide of 14-year-old Benjamin Lim after he was questioned by police over an alleged molestation case. 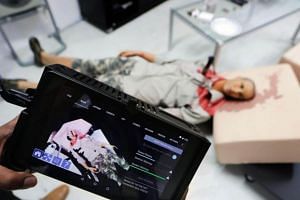 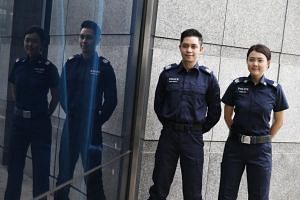 During that period, Mr Shanmugam said police officers should not be attacked and publicly added that he would take responsibility if the issue was with protocols.

An MHA review in 2016 concluded that existing processes were sound and suggested adjustments to boost coordination among agencies.

The Appropriate Adult Scheme for Young Suspects was introduced in April last year, allowing some youngsters to be accompanied by independent volunteers during police interviews.

Mr Shanmugam also said that despite online sentiment that appeared to oppose the passing of the Public Order and Safety (Special Powers) Bill, a recent survey on that particular law showed that the majority supported it.

The Bill, which was passed in March, gives the police expanded powers to deal with terror attacks and, among other things, allows officers to enforce a communications stop order.

The minister said the survey, conducted by government feedback unit Reach, showed that 82 per cent of the 1,038 people polled supported the Act.

"(If) you looked online during the period when we had the legislation in gestation, it would have created the feeling that there was a lot of opposition to it and we were doing something that was terrible."

The same Reach survey revealed that 76 per cent indicated that the Act was necessary to enable the police to handle major security incidents effectively. The survey was done after the law was passed.

Another 67 per cent thought it was reasonable for police to have powers to stop individuals from taking or sharing messages and videos about ongoing security operations, and 78 per cent said they trusted that the police would exercise these powers fairly.

In his speech yesterday, Mr Shanmugam noted that the new legislation, which will replace the Public Order (Preservation) Act, gives police powers that would not be "doable" in many countries.

He said: "I believed it was doable in Singapore because people trust the police that they will exercise their powers responsibly, and we need those powers to deal with the situations that are evolving. You cannot deal with the new threats with legislation that is outdated. Which is the problem that many countries are having."

He cited the example of the 2011 UK riots which killed five people and injured 205, of which nearly 190 were police officers. Property damage was estimated to be £200 million (S$363 million).

Instead of getting sidetracked by the 20 per cent who may object to a measure, "you ought to be focusing on the 80 per cent".

"So we have to be confident about what we do," Mr Shanmugam added. "As long as we believe honestly that it is the right thing to do.

"As for opposing viewpoints, we have a duty to look into them. Some of them, as I said, can be principled, and if the viewpoints are valid, we have to consider, adapt, make the necessary changes, and then when we make up our mind, proceed."

A version of this article appeared in the print edition of The Straits Times on May 04, 2018, with the headline 'Shanmugam: Police officers will have support of leaders'. Subscribe
Topics:
More
Whatsapp Linkedin FB Messenger Telegram Reddit WeChat Pinterest Print Purchase Article Copy permalink