The shooting of a 34-year-old man by police outside the Shangri-La Hotel on May 31 last year was "a lawful killing", a coroner ruled yesterday.

The officer who fired the fatal shot was simply doing his job of neutralising a perceived threat, when Mohamad Taufik Zahar drove through security barriers despite shouts to stop, and had no specific intention to kill, said State Coroner Marvin Bay.

Intoxicated on a cocktail of drugs, Taufik showed scant regard for the policemen trying to stop his car.

He was shot dead by a Gurkha officer on security detail outside the hotel, which was under tight watch as it was the venue of the Shangri-La Dialogue, a major security summit.

Shangri-La shooting: Police had to act 'because of threat': State Counsel 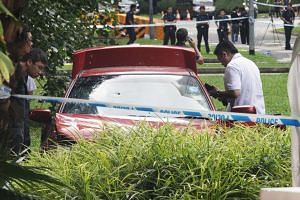 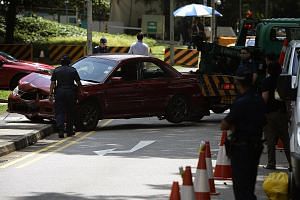 Despite repeated warnings to stop, Taufik accelerated his car past concrete barriers and towards a Vehicle Counter Assault Team of two armed Gurkha officers.

They opened fire after he breached the barriers and showed no sign of stopping. A fifth shot hit his head, killing him on the spot.

Taufik was on his way to Orchard Towers with two friends but had taken a wrong turn.

The trio were anxious to evade any roadblocks as they had all taken drugs and the two passengers had drugs on them. Taufik and one of them were also wanted by police.

In his findings, the coroner said the officers used their firearms as a last resort, having entirely reasonable grounds to assume hostile intent and that the car was carrying a vehicle-borne explosive device.

They could not have waited further, he said.

"The car would have reached the protected premises in a matter of seconds if it had not been engaged and stopped, as the distance between the final concrete barrier and Shangri-La Hotel was a mere 33m to 34m," the coroner said.

The second and third shots were fired as the car drove past the shooter, while the final round was fired as the car was already moving away from the same officer, presenting him with a small window of opportunity to bring the vehicle to a halt.

There was no option of leaving it up to chance that the car was not carrying any explosives, said Mr Bay. "If (the officer) had not engaged the vehicle, and if the car had in fact been carrying a vehicle- borne improvised explosive device, there might well have been catastrophic consequences."

The coroner said there was a need to take terrorism seriously, noting the use of car bombs in terrorist attacks overseas and the Jemaah Islamiah network's plan to use truck bombs here in 2001.

Taufik's wife, Ms Nassida Nasir, 33, who married him two months before he died, said afterwards: "Our daughter is too young to know what happened to her father. I will have to find a way to explain to her when she is old enough to understand."

Police shootings that the coroner previously ruled as justified homicide:

- On March 6, 2008, murder suspect Lim Bock Song, 43, died of a gunshot wound to the chest after he charged at a policeman with a knife at Outram Park MRT station. Police were going after Lim, a mental patient, for the fatal stabbing of Tan Ah Chang, 52, at Jalan Kukoh hawker centre, just 30 minutes earlier.

- On May 15, 2000, psychiatric patient Ang Swee Kiat, 37, was seen bare-chested, wearing only a pair of army camouflage trousers and carrying a 62cm-long iron rod in Seletar Club Road. When the police tried to check on him, Ang charged at a policeman, and ignored warnings to drop the rod. The officer fired a total of four shots at Ang - one pierced his arm, entered his chest and killed him.

- On April 2, 1999, Low Mui Chua, 47, who was wanted for drug-related offences and assaulting a public servant, attacked a policeman with a knife at People's Park. The policeman fatally shot Low once in the stomach.

- On April 24, 1998, a tussle broke out between drug suspect Othman Juri, 32, and two policemen in Boon Lay Drive. A policeman fired a first shot at his legs, but Othman continued to charge at him with a chair. The policeman fired another two shots before Othman collapsed. He died in hospital eight hours later.

Correction note: An earlier version of the story stated the name of man who was shot dead as Mohamed Taufik Zahar instead of Mohamad Taufik Zahar. This has been corrected.