In the incident on May 13 last year, 22-year-old Corporal Kok Yuen Chin drowned when he was thrown into a pump well at Tuas View Fire Station during a celebration to mark the completion of his national service.

The two officers, Kenneth Chong Chee Boon, 38, a lieutenant, and Nazhan Mohamed Nazi, 40, a first senior warrant officer, were commander and deputy commander, respectively, of the station that night.

The two men were in court on Monday (June 10) for their trial, which is expected to last two weeks.

The regulars were each charged in July last year with aiding a rash act by illegal omission that caused grievous hurt. The duo had allegedly failed to prevent a group of servicemen from pressuring Cpl Kok to enter the pump well, thereby endangering his life.

Three other regulars were also charged for their involvement, and two have been dealt with in court.

Cpl Kok, a Malaysian national and Singapore permanent resident, was pushed into the well during celebrations to mark his impending operationally ready date (ORD). 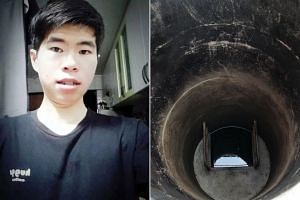 NSF who drowned was pushed into well by colleague, inquiry finds

When he did not surface, his colleagues drained the well. It took 36 minutes before they were able to pull him out, but he had drowned.

During Monday’s trial, staff sergeant (SSgt) Al-Khudaifi Chang, who was on duty on the night of the incident, was the first witness called to the stand.

In recounting the incident, the hazmat specialist said that at no point before the incident did anyone try to stop the ragging.

“During the whole time,  no one told us to stop and no one mentioned the word ‘stop’,” said SSgt Chang.

He said Chong and Nazhan were present during the cake-cutting ceremony in the control room before the pump well incident . There were more than 10 people in the room.

According to him,  SCDF regular Muhammad Nur Fatwa Mahmood, who has already been jailed for his involvement, had said in Malay, “Well, still means well”, to indicate that Cpl Kok would still have to enter the pump well.

After the cutting of the cake and presentation of a plaque to Cpl Kok, some of the officers grabbed the NSF and carried him towards the pump well.

SSgt Chang was one of the men who helped to carry Cpl Kok to the pump well.  He said that Nazhan walked with the group from the control room towards the pump well but did not stay with them for more than five minutes. He left and went to the fire station office.

“ I was thinking that we were just trying to scare him and not throw him in, “ said SSgt Chang. He said that when they reached the well, Cpl Kok removed his personal belongings and took off his polo tee on his own accord.

At one point, Chong stuck his head out of a window in the nearby control room to tell the group not to record any video of the incident.

“We all raised our hands to show that we did not have our handphones on us,” said SSgt Chang.

SSgt Chang said that before the incident, Cpl Kok had told him in a private conversation that he could not swim.

When Cpl Kok was sitting on  the edge of the pump well, the question of whether he could swim was raised. Cpl Kok responded to say that he could not swim,  SSgt Chang said.

But the answer was dismissed as there was an SCDF officer present whom the group believed was a good swimmer and could dive into the well to save Cpl Kok if needed, he added.

During the trial, the prosecution also showed four videos documenting the events leading up to the point when Cpl Kok was pushed into the pump well.

In one of the videos that was taken seconds before the fatal push, Cpl Kok is seen sitting on the edge of the pump well laughing and joking with the officers around him..

The trial will resume in the afternoon, when the defence is expected to cross-examine SSgt Chang.

In October last year, Nur Fatwa, 34, was sentenced to one year and four weeks' jail for causing death by rash act.

The staff sergeant admitted to pushing Cpl Kok into the pump well, which resulted in his drowning, and also abetting the obstruction of justice when he told another officer to delete a video recording of the incident.

Adighazali Suhaimi, 33, a staff sergeant, was sentenced to one month's jail  last December for deleting the video footage of Cpl Kok being pushed into the pump well.