SINGAPORE - The High Court on Friday (July 21) dismissed as "totally unmeritorious" an appeal by a Saudi Arabian diplomat against his conviction and sentence for molesting a hotel intern while he was here on holiday with his family last year.

Judge of Appeal Steven Chong said the sentence of 26 months and a week's jail and four strokes of the cane handed down to Bander Yahya A. Alzahrani, 39, was "actually lenient" especially given the "dishonest" manner in which he ran his defence.

However, the judge refrained from enhancing the sentence as there was no appeal by the prosecution.

Alzahrani, who was stationed in Beijing, China, had checked into the hotel in Sentosa in August last year but found the room too small for his family of five. He asked for a bigger room and a 20-year-old guest relations officer was assigned to show him a suite.

While they were in the bathroom of the master bedroom, he shook her hand and asked for a hug. She obliged as she had seen her manager hug guests and did not want to offend the guest.

With his arms around her, pinning her arms at her side, he began kissing her. She tried to push him away without success. He then turned her around so that her back faced him, and groped her all over her body. He also grabbed her hand and forced it against his groin. 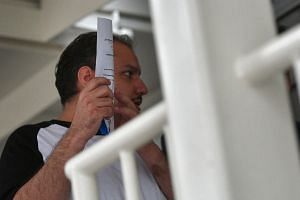 Saudi diplomat gets 26 months and one week in jail, 4 strokes of the cane in hotel molest case

After she broke free, he sat on a sofa in the living room for a while, before going to the bathroom again. He asked her for a kiss, saying he wanted to "put it in". He pushed her against the wall and again groped and kissed her. He also lifted her dress.

She eventually broke free and showed him out of the room before falling back into her work routine. A co-worker noticed that she was behaving unusually and asked her what the matter was.

The woman was reluctant to divulge any information but after some time, her colleagues persuaded her to disclose what had happened.

After an eight-day trial, Alzahrani was convicted and sentenced to 26 months' jail and four strokes of the cane for aggravated molest. He was given another week in prison for using criminal force.

He maintained his innocence and appealed.

On Friday, his lawyer, Mr Shashi Nathan, played surveillance footage from the hotel corridors, showing the woman walking calmly out of the room and talking to Alzahrani.

Noting that she showed no distress or fear, Mr Nathan said this was not the expected demeanour of someone who had been molested to such an extent.

But Deputy Public Prosecutor April Phang said the victim was a young woman trying to do her job under difficult circumstances and should not be penalised for putting her client and institution above herself just because she did not run screaming from the room.

The DPP said Alzahrani's defence "has more holes than a sieve". At first, he said his physical contact with the woman was limited to a handshake but when confronted with evidence that his DNA was found on the back of her dress, tried to explain it away by claiming that she fell and he had to support her.

He also claimed the woman had made up the allegations to extort money from him. He also alleged that she was imagining things.