A former director of Sakae Holdings was taken to court yester-day after he allegedly committed offences involving more than $20 million.

Ong Siew Kwee, 47, who was also a director of Griffin Real Estate Investment Holdings (GREIH), faces 17 charges, including two counts each of criminal breach of trust and cheating. The founder of ERC Holdings, who is better known as Andy Ong, is said to have committed the offences between 2011 and 2016.

The Straits Times reported earlier that Sakae Holdings, which runs the Sakae Sushi chain, was a minority shareholder of GREIH. Reports also stated that ERC Holdings was the holding company of the ERC group of companies.

It was reported that ERC Holdings was also an 80 per cent shareholder of Gryphon Capital Management, which managed GREIH's real estate investments. According to court documents, Ongallegedly committed criminal breach of trust involving a total of $23.8 million in 2012.

He allegedly signed a cheque from GREIH's bank account to transfer $8 million to his own account on May 24 that year.

On Sept 13, 2012, he is said to have illegally transferred a total of $15.8 million from GREIH's bank account to those belonging to ERC International and ERC Unicampus.

Besides these, on June 1 that year, Ong allegedly deceived Sakae Holdings into believing that ERC Holdings had validly exercised an option to buy 8,058,025 shares of GREIH.

They were: Chua Wei Tat, 34; Ong Han Boon, 43; Wijesekera Mahin Chandika, 44; and Ho Yew Kong, 48. All the men, except for Wijesekera, who is Sri Lankan, are Singaporeans. The Straits Times understands that Ong Siew Kwee and Ong Han Boon are not related to each other.

Ong Han Boon faces nine charges in all, including two counts of criminal breach of trust. He is accused of helping Ong Siew Kwee misappropriate the $23.8 million in 2012.

Ho, who faces four charges, is accused of two counts of intentionally giving false evidence in a judicial proceeding on Feb 11, 2016. 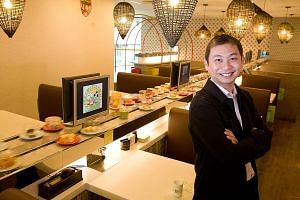 His two other charges state that he allegedly failed to use "reasonable diligence" when he performed his duties as a GREIH director in 2012 and 2013.

Wijesekera faces a single charge of intentionally giving false evidence in a judicial proceeding on Feb 15, 2016. Chua is accused of two counts of a similar offence.