An 82-year-old pedestrian on a sidewalk died in an accident with a car on Monday at a roundabout in Marine Parade, prompting residents to call for changes to the road design.

The Land Transport Authority (LTA), in response to media queries, said last night that it would continue to review public feedback and study the traffic situation in the area "to determine if further enhancements need to be made".

This is despite the area not falling under LTA's black spot programme, which was started in 2005 to identify locations with a high incidence of traffic accidents and implement measures to reduce the frequency and severity of such accidents.

The authority added yesterday that it had made changes to the roundabout in the past, following feedback.

On Monday, the police were alerted to the accident at the junction of Marine Parade Road and Amber Road at 12.30pm.

The woman was unconscious when taken to Tan Tock Seng Hospital, where she died from her injuries.

The driver, a 29-year-old man, is helping police with investigations.

The sidewalk is really narrow. We need some kind of protection as the cars go by really close.

The accident occurred at a roundabout where Silversea condominium is located.

Condo resident Sandra Zecasper, 38, was heading to the bus stop when she saw the accident.

She said the woman was bleeding heavily from her nose and her mouth.

Ms Zecasper, who works for an overseas company and lives here with her diplomat husband and family, added that the driver did not seem injured.

She said the roundabout was very dangerous, with many pedestrians - several of them with young children - using the sidewalk around it.

"The sidewalk is really narrow. We need some kind of protection as the cars go by really close," she said.

Many pedestrians also use strollers, but the sidewalk is too narrow to accommodate two strollers at the same time, she added.

Silversea resident Daniela Romao, 36, who owns a relocation company, said: "I've stopped listening to music on my phone when I walk along this road because I think it is too scary."

A neighbour also told her a young boy once fell off a scooter on the sidewalk, and a car stopped just inches away from his head. 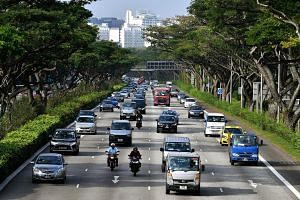 Silversea residents have been worried about the safety of the roundabout for months, said Ms Romao.

She added that after Monday's accident, many residents have decided to write to the LTA, asking for safety measures such as putting up railings or installing speed bumps.

In its reply to the media yesterday, LTA said that after feedback from residents in 2017, it widened the footpath at the roundabout and the road leading to Silversea from 1.5m to 1.8m.

Other measures taken include painting the kerbs surrounding the perimeter of the roundabout black and white to make them more visible to motorists.

This is to help motorists distinguish the roundabout from the footpath.

Signs also remind motorists to give way and watch out for oncoming traffic before and when they enter the roundabout.

Speeds of vehicles are also reduced before they enter the roundabout, with the implementation of lane merging on Marine Parade Road towards Amber Road.

"We urge all road users to play their part and exercise caution and consideration when using our roads," LTA added.