SINGAPORE - The National Council of Churches of Singapore (NCCS) has praised the Christian and Muslim communities' reaction to anti-Muslim comments made by an American preacher on a visit to Singapore.

In a speech at the Kingdom Invasion Conference here on March 13, Mr Lou Engle claimed that "Muslims are taking over the south of Spain", and added that he hoped to "raise up the church all over Spain to push back a new modern Muslim movement".

The event was organised by Cornerstone Community Church, whose senior pastor Yang Tuck Yoong met Mufti Mohd Fatris Bakaram and other Muslim community leaders on Wednesday night to apologise for the comments made.

He also issued a letter of apology to the Islamic Religious Council of Singapore (MUIS) on the same day.

"We appreciate Rev Yang's clear disavowal of the remarks made as 'insensitive' and having no place in the multi-racial and multi-religious context of Singapore," the NCCS said in a letter dated Thursday (Apr 5).

The council added that it was "deeply appreciative of the measured response" shown by the Muslim community in Singapore.

"Their gracious acceptance of Rev Yang's apology shows a magnanimity which bodes well for inter-religious harmony in our nation. 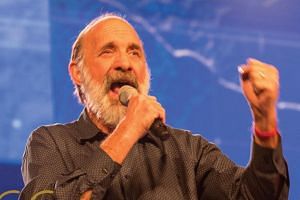 "Where there is unintended hurt, it is marvellous that the relevant religious leaders can graciously and maturely handle the matter and keep unhappiness from deepening or spreading."

Police have asked Mr Engle, 65, to return to Singapore for an interview. It is not known if he intends to comply with the request.

In 2011, Mr Engle - who once accused Muslims of "fuelling the demonic realm" - organised a 24-hour event in Detroit where more than 20,000 attendees prayed for Muslims to convert to Christianity. A year earlier, he had expressed support for a Bill in Uganda that called for homosexuals to be jailed or killed.

In a Facebook post on Wednesday, Minister-in-charge of Muslim Affairs Dr Yaacob Ibrahim said he appreciated that Pastor Yang had taken responsibility for inviting Mr Engle.

"Words matter, and words that sow discord and ill will among the various communities have no place in Singapore," he said, adding that people here should "continue to uphold mutual respect and harmony for our common good".

Last September the Ministry of Home Affairs (MHA) rejected work passes for two foreign Christian preachers who had made "denigrating and inflammatory comments on other religions".