The High Court yesterday dismissed an appeal by the prosecution and upheld a district court decision that Metro family scion Ong Jenn was not guilty of abetment to traffic in drugs.

Ong, 43, was originally charged with two counts of abetment to traffic in 92.68g of cannabis and 385.1g of cannabis mixture. The charges relate to a block of cannabis that was found on Ong's drug supplier, Mohamad Ismail Abdul Majid, who was arrested on Oct 30, 2014.

Prosecutors contended that Ong had ordered the cannabis from his dealer with the intention of trafficking the drugs to others.

Following a six-day trial, Ong was acquitted in May last year. The trial judge accepted his explanation that the drugs were meant for his own consumption, and reduced the charges to attempted possession.

Ong is currently serving a two-year jail term after pleading guilty to the reduced charges.

In July this year, prosecutors appealed against the acquittal on the original charges, which carry a sentence of at least five years in jail and five strokes of the cane on each count.

Yesterday, Justice Hoo Sheau Peng agreed with the trial judge that the charges for abetment of trafficking have not been made out. 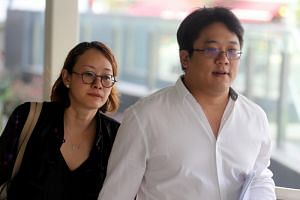 The judge was not convinced by the prosecution's argument that it was absurd for Ong to order more drugs for himself when he already had 360g of cannabis at home.

She found that even though he had drugs at home, Ong, being a "man of means" who could afford them, agreed to buy more when Ismail called him about the drugs.

"While this might be somewhat of a stockpile, there was no evidence this was well beyond his consumption needs," she said, adding the prosecution did not challenge that Ong was a long-term drug addict.

As for text messages between Ong and two female friends that the prosecution relied on to show that he had agreed to sell or share the cannabis with them, Justice Hoo noted that the two women were not called as prosecution witnesses.

She said: "In my view, there was some difficulty in drawing the links to the drugs in question."

The case was adjourned to Nov 1 to hear the prosecution's appeal for at least three years in jail on the attempted possession charges.

Ong also faces another set of drug charges relating to the cannabis that was found in his home.