SINGAPORE - A Singaporean man, whose company was accused of playing a role in helping Tokyo win the bid to host the 2020 Olympics, was charged in court on Thursday (Feb 15) with two counts of giving false information to a Corrupt Practices Investigation Bureau (CPIB) officer.

He is said to have lied to the officer, claiming that a sum of $547,819.53 transferred to his firm's bank account on March 27, 2014 from a company known as Pamodzi Consulting Sarl was payment for sponsorship servicing and consultancy services.

The Straits Times earlier reported that Tan and the younger Mr Diack were close friends.

Tan allegedly told another lie to the CPIB officer by stating that a man known as Mr John Pierre Bonor, or somebody who pretended to be the younger Mr Diack, had tricked him into transferring a sum of $524,064.90 from Black Tidings' bank account to one belonging to a Mr Igor Shobukhov.

According to an earlier Straits Times report, Black Tidings made headlines when British newspaper The Guardian stated that French authorities were looking into suspicious payments made by the Tokyo bid team, allegedly to influence the vote to decide the 2020 Olympic host. Japan also launched its own probe into the matter. 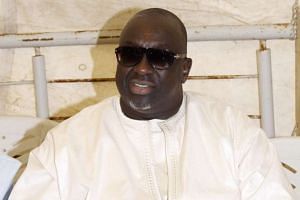 They were questioning the US$2 million (S$2.6 million) in consulting fees paid to Black Tidings by the Tokyo bid team in 2013. That year, Tokyo beat Madrid and Istanbul to win the hosting rights to the quadrennial Games.

In February last year, it was reported that Japanese officials had repeatedly said the payments had been legitimate consultancy fees.

A panel commissioned by the Japanese Olympic Committee also said in September 2016 that it had found that the payment was legitimate.

Tan, who is represented by lawyer Sunil Sudheesan, is now out on bail of $5,000.

He will be back in court on March 15.

If convicted of giving false information to the CPIB officer, Tan can be jailed for up to a year and fined up to $10,000 for each charge.