SINGAPORE - The police have arrested a man in connection with the death of a 28-year-old woman in a flat at Block 70, Circuit Road, last month.

In a statement on Wednesday (April 6), the police said the suspect, 47, was arrested by the Malaysian police in Malaysia on Monday, and handed over to the Singapore police on Tuesday evening .

"With the strong co-operation and assistance from the Royal Malaysia Police, the suspect was arrested in Malaysia on April 4, pursuant to a warrant of arrest issued by the State Courts in Singapore," the statement added.

The Straits Times understands that the suspect is Malaysian.

On March 23, the victim was found lying motionless in the rented bedroom of the third-floor flat by the landlord, who was at the unit to check on it, since his tenant had told him that he was going on a business trip. 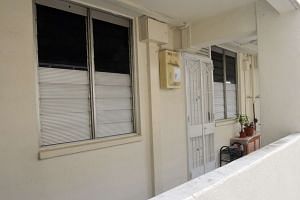 The landlord said he found someone lying on the bed and thought the person was his tenant. It was only after he came back from dinner and realised that the person had not moved that he pulled back the blanket to find the woman, who he said sometimes stayed over.

If found guilty of murder, the suspect faces the death penalty.

Mr Tan Chye Hee, Deputy Commissioner of Police for investigations and intelligence, said in the statement: "Once again, I would like to convey my appreciation to the Royal Malaysia Police for their strong and unequivocal support for this case that resulted in the arrest of the murder suspect in Malaysia."

Mr Tan, who is also concurrent director of the criminal investigation department, added: "The Singapore Police Force will continue to work with our foreign law enforcement partners, and ensure that criminals who commit crimes in Singapore and flee our borders thereafter will be brought back to justice."