SINGAPORE - An independent review panel will be convened to look into the incident where a man fired three rounds from a police revolver at Khoo Teck Puat Hospital given the seriousness of the incident, said Home Affairs Minister Teo Chee Hean.

Muhammad Iskandar Sa'at, 23, was at the time in police custody for motor theft, and was being escorted while waiting for a check-up after he complained of chest pains.

He tried to flee and during the ensuing struggle, grabbed one of his two escorting officers' revolver, shooting the officer in the hand and foot.

Mr Teo said in a written response in Parliament on Monday that the independent panel will review the findings of internal investigations conducted by the police. 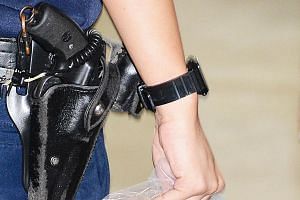 Mr Hri Kumar Nair (Bishan-Toa Payoh GRC) had asked about the safety and security protocols when the Police escorts persons-in-custody in hospitals, whether these were followed in this case, and what changes, if any, police will make.

The Ministry of Home Affairs (MHA) has an independent review mechanism which can be convened by Ministers when it comes to "cases of significance", he explained.

Preliminary investigations by the police showed that escort procedures - last reviewed in 2014 - are "generally sound", he said, but the police are now doing audits to ensure procesures are being properly followed on the ground.

"Every escape or attempt to escape from custody is a very serious matter, as this could pose a threat to public safety," noted Mr Teo.

The police's Internal Affairs Office is therefore conducting an investigation into possible negligence of duty by the officers involved in the incident.

Criminal investigations into the unlawful discharge of firearms will also continue.

Findings from all these investigations will allow the police to identify any shortcomings in compliance and take corrective action if gaps in existing procedures are found.

A person in police custody who requires medical attention may be escorted out of secured police facilities to a hospital for treatment, according to established procedures.

The person, for one, must have on a set of grip restraints. This comprises two belts - one around his waist with two wrist restraints to lock his hands at the sides of his waist; another with ankle restraints. These cannot be removed unless deemed necessary by medical staff.