SINGAPORE - On Aug 7 this year, police officers showed up at the Singapore Press Holdings in Toa Payoh North asking to speak to two journalists, one of whom was Ms Janice Tai.

As both reporters were not in the office then, the officers were asked to check back later.

It soon became clear that the police were investigating an article that Ms Tai had been working on.

In late June this year, Ms Tai, 29, started work on a story that included the launch of a new Housing Board (HDB) resale portal.

Ms Tai had heard about the portal from HDB officer Ng Han Yuan, 25.

They met through the dating app Coffee Meets Bagel around March this year. Ms Tai said she joined the app to widen her social circle and that she and Ng were friends.

They met about six times over several months. 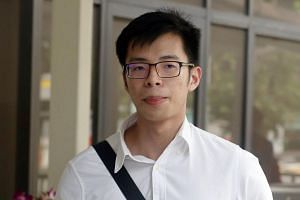 In the course of their conversations, Ng mentioned the portal and other new HDB initiatives, which was information he was privy to as a result of his role as an estate manager.

Ms Tai told her supervisor about the story, and was told to find out more from industry players and get an official comment from HDB.

In the course of checking out the story, Ms Tai approached various parties, including property agents and the Singapore Institute of Surveyors & Valuers (SISV), for their views. She also sent HDB a list of questions. This raised the alarm within the Government about a leak after both SISV and Ms Tai approached them about the story.

According to Ms Tai, she told Ng she was planning to e-mail questions to HDB officials and others in the private sector to get their views. He noted this and asked her to let him know what their responses were.

In July, when the sensitive nature of the information became clearer, Straits Times editors decided to hold off on the story till an official announcement was made.

This eventually happened on Oct 19, when HDB announced changes to its resale portal, which will go online on Jan 1 and make it easier for users to file applications and conduct eligibility checks.

On Aug 10, Ms Tai and the other reporter went to the Police Cantonment Complex for questioning.

The second reporter - who had been asked by editors to help Ms Tai verify some information - was released after about two hours.

Ms Tai was questioned from 9.30am to 12.30pm. She was asked to name her source but did not do so. Her mobile phone was later seized.

She returned at 5pm for further questioning. By then, the police had identified Ng from her phone. He was taken to the interview room where she was held.

She was then asked again to name her source but did not do so, citing her professional and ethical duty towards her sources.

At about 6pm, she was placed in a single cell, where she remained overnight.

At about noon the next day, she asked to speak to Ng, whom she knew was in custody at the Police Cantonment Complex.

She asked him if she could release his name as her source since the police had already identified him from the information on her mobile phone. He agreed.

Ms Tai gave a statement naming Ng as her source and was released from lock up at about 3pm.

For her involvement, she was issued a stern warning by the police.