SINGAPORE - An accident involving an electrical source was what led a Christmas tree to catch fire outside Knightsbridge mall on Wednesday night (Dec 2), according to preliminary findings released by the Singapore Civil Defence Force (SCDF) on Thursday (Dec 3).

The fire at Orchard Road, outside Abercrombie and Fitch, was reported to be about two-storeys high. Videos on social media showed the tree in flames, releasing thick smoke. The SCDF received a call at 9.06pm and when it reached the scene, the fire had already been put out by security guards from the mall.

From Jan 1 to Dec 2, the SCDF responded to seven cases of fire involving festive decorations and lightings, it said in its statement on Thursday (Dec 3).

Christmas tree on fire outside Abercrombie & Fitch at Orchard Road

It advised the public on precautions to take when putting up decorations and lightings. Users should check decorative lighting fixtures for damage and defects before use, and regularly thereafter for wear and tear. It also recommends using decorations that carry a safety mark and to turn off lighting fixtures such as lit Christmas trees when leaving the house or going to bed. Lighting rated for indoor use should not be used in outdoor areas. 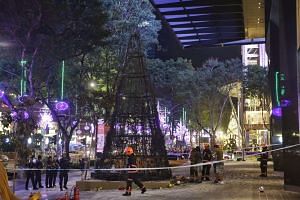 Said a spokesperson for Park Hotel Group, which manages Knightsbridge mall: "The Christmas tree is part of our annual festive decorations and like every year, the decorations that were put up comply with safety regulations."

Retailers of real Christmas trees, used in home decorations during the festive period, said that they are unlikely to catch fire as long as appropriate safety measures are taken.

Sales and marketing director of retailer FarEastFlora, Mr Peter Cheok, said that all customers are given a flyer containing tips on how to care for the tree and maintain safety.

"For example, no more than 80 per cent of the tree should be covered in decorations," he said, as using too many light fixtures could cause over-heating.