SINGAPORE - When a woman and her husband went to a clinic after the doctor had left, a staff nurse leapt at the opportunity. He pretended to be the doctor on duty and molested the woman by conducting unnecessary and inappropriate examinations, including an electrocardiogram (ECG) test, on her.

Muhammad Ruzaini Johari, 33, was working as a staff nurse at a clinic in Yishun when he unhooked a 28-year-old woman's bra and touched her chest, all while pretending to be a doctor.

He pleaded guilty on Tuesday (July 3) to one charge of molestation.

The court heard that on May 11 last year, Ruzaini was on afternoon duty and had stayed behind in the clinic to finish up some administrative tasks after the doctor on duty left.

At 8.40pm, the woman and her husband, 33, showed up at the clinic. The couple work as components assemblers and cannot be named due to a gag order to protect the woman's identity.

The woman had complained of a headache, pain in her ears and a sore throat earlier and visited the clinic on her husband's advice.

They saw that the lights were on in the clinic and thought it to still be in operation. 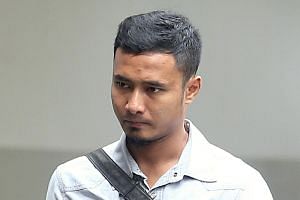 Instead of informing the couple that the doctor was already off duty, Ruzaini asked the woman to enter the consultation room, while he sat in the doctor's chair.

After some brief examinations using the stethoscope and blood pressure monitor, Ruzaini asked the woman to lie down on her back.

He lifted her blouse and started pressing her exposed stomach area. He continued to press down until he reached the area above her groin. The woman felt embarrassed but did not protest as she believed Ruzaini to be a doctor, the court heard.

Ruzaini then retrieved an ECG device, usually used to measure a person's heart activity, to conduct a test on the woman despite knowing that there was no reason to do so.

He did it as he was "thrilled by the prospect of being able to get (the woman) to expose her breasts to him", according to Deputy Public Prosecutor Marshall Lim.

He lifted the woman's blouse to expose her chest and unclasped her bra to place the ECG electrodes on her breasts, wrists and ankles.

The woman then became very uncomfortable and confronted Ruzaini, removed the electrodes from her body, dressed herself and left the room.

She burst into tears and told her husband what had happened.

Ruzaini then pleaded with the couple not to call the police but the woman's husband made a police report.

Investigations later revealed that Ruzaini was not a registered doctor.

Ruzaini will return to court on Wednesday for his mitigation plea and sentencing.

He can be jailed for up to two years and be fined or caned for outraging a woman's modesty.