SINGAPORE - Nine of the 14 men who were charged last week in connection with the misappropriation of fuel from Shell were back in court on Monday (Jan 15) to face more charges.

Each man faced one to two more charges, bringing the total of gas oil misappropriated to about 6,600 tonnes amounting to $3.6 million.

All were represented by lawyers.

Muzaffar Ali Khan, Juandi, Cai, Tiah and Koh allegedly abetted in a conspiracy to misappropriate 300 tonnes of gas oil worth $165,000 on Nov 11 last year, when the oil was entrusted to Juandi, Cai, Koh and Tiah. 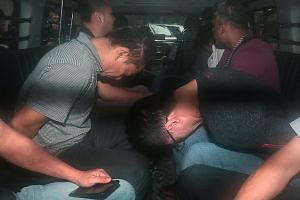 17 nabbed for stealing fuel from Shell

Muhammad Ali’s new charge states that he abetted Shell employees Muzaffar Ali Khan, Juandi, Tiah, Cai and Koh, and Vietnamese national Doan Xuan Than, 46, in a conspiracy to misappropriate 1,076.9 tonnes of gas oil worth $592,295 on Dec 31 last year. Than was not an employee of Shell.

As for Mohd Ibrahim, Abdul Latif and Goh, they are accused in the new charge of abetting in a conspiracy to commit criminal breach of trust of 846.4 tonnes of gas oil worth $465,520 on Nov 14 last year.

Deputy Public Prosecutor Stephanie Chew sought a further week's remand for the nine, saying there are likely to be additional charges.

Lawyers for all nine were allowed to speak briefly to their clients, who appeared in court in red prison overalls, in the presence of a police officer.

They will be back in court next Monday afternoon.

Meanwhile, the case of two Vietnamese nationals Nguyen Duc Quang, 46, and Dang Van Hanh, 37, accused of abetment by conspiracy to dishonestly receive about 1,260 tonnes of oil by transferring the fuel to a vessel, will be mentioned on Tuesday (Jan 16).

Than and two others - Alan Tan Cheng Chuan, 45; and Ng Hock Teck, 54 - who were charged last Saturday - will appear in court on Thursday.