New technology unveiled yesterday will make it easier for the police to fight crime and enforce the law.

Souped-up smartphones will allow officers to respond faster and more effectively to incidents, as well as call up key information on a case. Robots on patrol can aid in the detection of suspicious activities, and handheld scanners will make it easier to take real-time 3D scans of crime scenes to help investigators.

Some of these technologies were presented by Law and Home Affairs Minister K. Shanmugam at the Singapore Police Force's (SPF) annual workplan seminar at the Singapore University of Technology and Design.

The police smartphone will allow officers to receive real-time information on the ground 24/7.

"It helps them make better decisions, faster decisions, and more effective response on the ground," said Mr Shanmugam, addressing about 1,000 officers in the crowd.

From next March, 8,000 front-line police officers will be able to use police-issued smartphones when they respond to incidents and engage the public.

The Multi-purpose All Terrain Autonomous Robot, and 3D hand held scanners are introduced

The phones will come with custom-built SPF apps that will be hosted on a secure platform.

A police spokesman said a police-issued phone would ensure that officers use devices with adequate security designs, as opposed to having them download apps on their personal phones, which could vary in model and security configuration.

Currently, officers use bulky mobile data terminals to send and receive messages from their command centres. To communicate with fellow officers on the ground, they have to make calls on their personal phones and are not allowed to transmit case information via normal messaging apps.

With the police smartphone, they will be able to perform the functions of calling, messaging and incident report filing all on one platform. The phones will also let officers access information on standard operating procedures on the go, en route to an incident and even while they are off duty.

Some apps will allow them to quickly map out points of interest - like locations of closed-circuit television (CCTV) cameras - and identify uniforms of suspects. This will aid investigations.

In the future, officers will be able to pull up information about a suspect's criminal record. 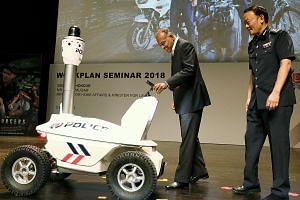 Police officers will have support of leaders: K. Shanmugam

Should the device be lost, there are security measures to remotely delete information on it. Access and use of the phone and its apps will be monitored and misuse will result in disciplinary proceedings, said the police spokesman.

So far, about 700 officers have been issued the smartphones.

Mr Shanmugam said harnessing technology has become essential for the authorities to do their job, for example, in surveillance and sense-making. "Today, more than 2,000 cases have been solved by the use of cameras. It has reduced substantially the number of unlicensed moneylending type of acts," he said.

About 70,000 police cameras have been installed. Another 5,000 will be installed this year.

Mr Shanmugam cited China as a leader in the use of CCTV surveillance, with one of the largest networks in the world. Its cameras have facial recognition technology and are deployed at places including concerts and festivals, he added.

A suspect wanted in a major Chinese city was nabbed about 7,000km away after such cameras picked him up at a Jacky Cheung concert among 60,000 people, said Mr Shanmugam, referring to a news report. "That is the kind of power that technology can give to law enforcement officers."

Going high-tech on the front line