SINGAPORE - A schoolboy was unhappy that a classmate had missed scoring a goal during a game of football and immediately made his way to a nearby goal post.

The Secondary 1 student from Geylang Methodist School (Secondary), Muhammad Hambali Sumathi, 12, then grabbed the overhead crossbar that was more than 2m from the ground, causing the structure to collapse. It struck his head, knocking him unconscious.

The bleeding boy was rushed to KK Women's and Children's Hospital where he died of a head injury in April.

In an inquiry into his death on Monday (Sept 18), the court heard that following this incident, the Ministry of Education issued guidelines to enhance safety pertaining to goal posts in schools.

For instance, schools have to attach warning labels to crossbars 1.8m high and above. Foldable goal posts can also no longer be used in schools.

He added: “There is always a need to anticipate the possibility that students will use or misuse equipment in an unexpected, unorthodox, or otherwise unsafe manner and expose themselves to injury.

“Imbuing students and teachers with a keen sense of safety consciousness, along with close supervision during PE sessions, would be key to alleviating this risk of harm.”

Investigation officer Irina Ng told Coroner Bay that Hambali and his classmates were having their physical education lesson in their school compound at around 8.45am on April 24.

Hambali played football with the other boys and they had used a smaller goal post - not the one that would later fall on him. 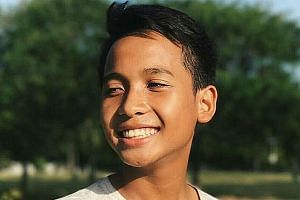 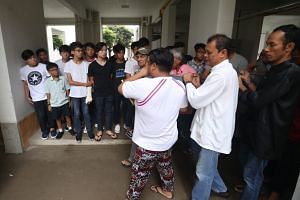 When his classmate missed scoring a goal, Hambali went to the bigger goal post that was not in use at that time, and grabbed hold of the overhead crossbar - with tragic results.

Inspector Ng said the collapsed goal post was bought in 2014 and it had a back bar which could enhance its stability. But the back bar had corroded by April this year.

The back bar of a goal post is located on the ground behind the goalkeeper, parallel to the crossbar.

However, Insp Ng told the court that the back bar is an optional requirement and it is not compulsory for goal posts to have them.

She added that audits had earlier been conducted in the school last year and this year on items including the sports equipment.

The court heard that the affected goal post had not been identified as a safety concern during these audits.

Following this tragedy, Insp Ng said, the school now has signs to remind students not to push, pull or hang from goal posts.