SINGAPORE - The police, the Singapore Civil Defence Force (SCDF) and other agencies now have access to a joint facility to coordinate operations during major events.

The first of its kind to be built, the Home Team Joint Facility (HTJF) in Kallang Fire Station operates as a command and staging area during such operations.

The fire station's location next to the Singapore Sports Hub and the city makes it an ideal site to house the facility, said Home Affairs and Law Minister K. Shanmugam during the official opening of the fire station on Wednesday (Oct 9).

"It is a good platform for even greater collaborations within the home team agencies," said Mr Shanmugam.

The HTJF is located on an upper floor in the fire station, and includes a main command room where personnel from the police, SCDF and other agencies will work together.

SCDF's director of operations, Assistant Commissioner Daniel Seet, said the purpose-built facility would allow the agencies to quickly set up their command capabilities - unlike in the past where agencies must first find a suitable site for their operations.

HTJF would be available to the police and SCDF during major events like the Formula 1 races and National Day as well as during security incidents, said AC Seet.

"This allows us to come together and think more about how we can do joint operations better, how to synergise our work better," he said.

To accommodate such joint operations, the Kallang Fire Station has a total floor area of 14,000 sq m for housing a large number of emergency vehicles that can be quickly deployed. 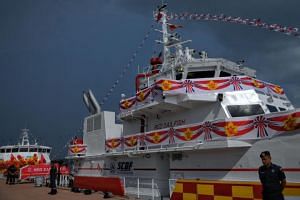 Auxiliary cops, retired officers may be tapped for fire checks

Born in a fire station, served in the fire service for 41 years and now an 'Outstanding SCDF Volunteer'

The fire station also houses vehicles such as the Pumper Firefighting Machine, an unmanned firefighting device, and will house the SCDF's first High Level Articulated Appliance, a machine that can be extended to reach the top of a 30-storey building.

During the launch of the fire station on Wednesday, Mr Shanmugam also announced a new career track for uniformed officers known as the Ops-Tech track.

These officers will receive specialist training and will be based in the SCDF and Singapore Police Force where they will integrate technology into the agencies' everyday operations.

SCDF's Deputy Commissioner (Future Technology and Public Safety) Teong How Hwa said the officers will serve as a bridge between agencies like the SCDF, and the upcoming Home Team Science and Technology Agency.

"The future looks very exciting for them, because ops-tech officers can translate frontier technology into front-line operations."