SINGAPORE - When national silat athlete Muhammad Nurshahrin Shahrudin's father tried to wake him up in his bedroom on the morning of March 14 this year, the 21-year-old was unresponsive.

His father then carried him out of the bedroom to the living room where he tried cardiopulmonary resuscitation.

But Nurshahrin's jaws were locked and his father could not perform artificial respiration. Shortly after, he called for an ambulance.

His death, the State Coroner said, is a "sad cautionary tale of the hazards of combining medications to achieve a narcotic effect, and be heedless of their potential to cause severe bodily harm, or even death."

A month before he died, Nurshahrin, an army regular, was arrested for shop theft. He was found with a suspicious tablet and asked to provide his urine sample, which later tested positive for Nitrazepam, a sedative, as well as morphine and codeine, both painkillers.

He was placed under investigation for drug consumption by the Central Narcotics Bureau. 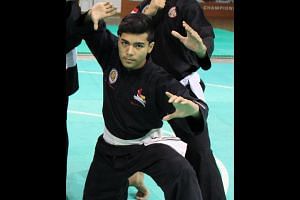 That month, Nurshahrin told a bunkmate in Nee Soon Camp that he started consuming drugs while studying at the Institute of Technical Education, and that he had acted as a runner to distribute drugs. And he admitted to still taking drugs occasionally.

One bunkmate also said he would sometimes look "stoned", particularly when he booked into camp, while another bunkmate said he was jovial and lively, but seemed curiously slow in his speech.

His camp superior, meanwhile, noted that he was "drowsy and slow in his speech, somewhat uncharacteristic for a highly accomplished martial arts exponent and sportsman of his calibre", the coroner said.

A day before Nurshahrin died, two bunkmates saw him with some tablets. One saw three slabs of small pills and a bottle of medication in a small red plastic bag he had, while another saw a slab of white tablets in a small white plastic bag. When queried, he said he was sick.

Although usually quiet and introverted, Nurshahrin was unusually exuberant and went around asking everyone to take pictures with him in his bunk before booking out for the weekend that Friday.

Later that night, his family noticed that he was tired and listless during supper.

A forensic pathologist later found an array of eight separate drugs and substances in his body in varying amounts that, if taken on their own, would not be lethal.

But in combination, the drugs caused his death from "mixed drug intoxication", the pathologist found.

There was no evidence of foul play or of Nurshahrin harbouring suicidal thoughts. The medications found in his system were also not taken in massive doses typical of a person with suicidal intentions, the coroner said.