SINGAPORE - Well-known local model and club DJ Tenashar has been taken to court on drug charges.

The former FHM Singapore cover girl, whose full name is Debbie Valerie Tenashar Long, is facing two counts of drug consumption. One involved cocaine and the other involved psilocin - a substance found in most psychedelic mushrooms.

The 32-year-old Singaporean is also facing one count each of importing psilocin - a controlled drug - and being in possession of nimetazepam or Erimin-5.

Long, who was first charged in court on May 26, allegedly committed the offences in October 2015.

She is now remanded at Changi Women's Prison and appeared in court via video-link on Friday (June 22).

The court heard that the prosecution was not ready as the Agri-Food and Veterinary Authority is currently looking into a possible animal cruelty-related charge against her.

The containers were labelled "Psilocybe Atlantis Forbidden Fruit". The contents, which weighed about 42g,  were analysed and later found to contain psilocin, a compound which online open chemistry database PubChem says is found in most psychedelic mushrooms.

Long is also accused of consuming psilocin and another substance known as benzoylecgonine, a major metabolite of cocaine, on Oct 28, 2015.

At around 3am the next day, she is said to have had an Erimin-5 tablet in her possession in a sixth-storey unit at The Quayside condominium in Robertson Quay.

News of her alleged drug-related offences first made the headlines in April 2016 when The New Paper reported that Long and her then boyfriend, Mr Thorsten Nolte, who is in his 40s, were wanted by the Central Narcotics Bureau for failing to report back after they were arrested for drug-related offences in 2015.

Long had earlier told TNP that she had been dating Mr Nolte since February 2015. He was then separated from his wife, local celebrity Jamie Yeo.

This was shortly after Ms Yeo, now 41, told lifestyle magazine 8 Days that she was divorcing Mr Nolte, whom she had married in 2010. The divorce has since been finalised. 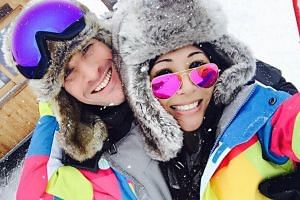 The Straits Times understands that Mr Nolte is still at large.

Earlier news reports stated that Long was the first Singaporean to be featured on the cover of Playboy Thailand magazine in October 2013.

That same month, she also became the first Singaporean to make British music magazine DJ Mag's list of Top 100 DJs, snagging the No. 87 spot. She was the only solo female DJ to make the list that year.

Long, who is represented by lawyers Eugene Thuraisingam and Syazana Yahya, was offered bail of $30,000. She will be back in court on July 18.

If convicted of drug consumption, Long can be jailed for up to 10 years and fined up to $20,000 on each charge.

She faces up to 20 years in jail if convicted of importing psilocin.