SINGAPORE - Victims have lost at least $24,000 to mobile phone scams on e-commerce platforms in the first five months of this year, the police said.

In an advisory on Thursday (Aug 15), the police said there have been at least 71 reports made about such scams from January to May.

In the cases, victims were unknowingly saddled with loans while they were trying to buy mobile phones online.

Some of the victims were deceived into providing personal information such as their NRIC, SingPass or bank account details, thinking that they were signing up for an instalment plan to buy the mobile phones.

They later discovered a sum of money deposited into their bank accounts and the scammers then demanded that they repay the loan amount with interest.

In other instances, the victims were offered loans to buy the mobile phones.

They would then receive a sum of money in their bank accounts, regardless of whether they had agreed to the loan offers or not. They were then asked to make repayments.

The police advise members of the public to take the following precautions against such scams:

- Never give your personal information such as NRIC, SingPass or bank account details to strangers or unverified sources. Do not provide information that is not necessary to make a purchase. 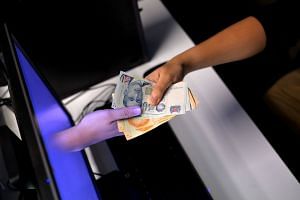 Close to 120 people investigated over scams that cost victims $325,000

- If you suspect that you have received an unknown sum of money in your bank account, report it to the bank and the police immediately. If the money is still in your account, do not make any transactions with it.

- Check the track record and background of the company or seller before making a purchase. Be wary that fraud artists can appear and disappear on e-commerce platforms, so the lack of a complaint record is no guarantee of legitimacy.

Those who wish to provide information related to such scams can call the police hotline 1800-255-0000, or submit it online at www.police.gov.sg/iwitness.

They can also call the National Crime Prevention Council's "X Ah Long" hotline 1800-924-5664 to give information on unlicensed moneylenders.