SINGAPORE - A man was jailed for nine years on Monday (June 18) for masterminding an elaborate motor insurance scam involving the largest amount of fraudulent claims to date - almost $1.6 million.

Sollihin Anhar, 45, played a key role in a syndicate that roped in car owners for the scam, recruited phantom drivers and passengers, and guided them in submitting fraudulent claims to 13 insurance companies, including Aviva Limited and AXA Insurance Singapore.

Under the plan, which prosecutors described as "easy to fake yet hard to detect", Rahmat would drive the cars to certain locations to engineer traffic accidents.

He would then remind the phantom drivers to report these "accidents" by filing Singapore Accident Statements. 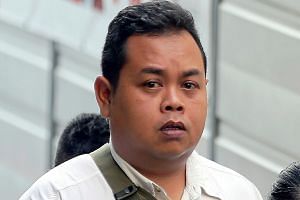 The car owners received rewards such as free repairs and cash.

Last year, he was convicted of 18 charges, mainly for cheating, following a 10-day trial.

He had pleaded guilty to 37 other charges in March this year, including attempting to pervert the course of justice.

The court heard that another 148 charges were taken into consideration during sentencing.

More than 50 of Sollihin's accomplices have been convicted, including Rahmat who was jailed for six years and two months in 2016. The cases involving several other alleged accomplices are pending.

The prosecution said earlier this year that the insurance companies lodged several police reports between January 2012 and March 2014.

When police started investigating Sollihin, he contacted various witnesses and instructed them to tell the officers that the accidents were genuine.

"The entire criminal enterprise required planning and premeditation and a deterrent sentence is warranted on the top level and principal player of the syndicate," they said.