SINGAPORE - The man who walked across the race track during the Formula One Singapore Airlines Singapore Grand Prix was allowed to be out on personal bond of $15,000 on Friday (Oct 2).

Briton Yogvitam Pravin Dhokia's lawyer Shashi Nathan, who was briefed earlier this week, applied successfully for the 27-year-old's bail to be varied. His parents were in court.

Counsel made the unusual application of asking that Dhokia be released "on his own cognisance''. 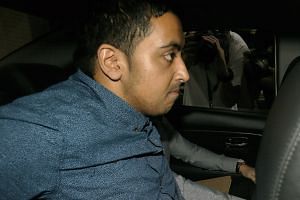 Dhokia was produced in court last Tuesday for acting rashly to endanger the safety of the F1 drivers involved in the race near Turn 13 along Esplanade Drive at about 9pm on Sept 20.

The case scheduled originally for Oct 6 is now fixed for pre-trial conference on Oct 16.

If convicted, Dhokia could be jailed for up to six months and fined up to $2,500 .