SINGAPORE - A 47-year-old man was charged on Thursday (April 7) with the murder of a 28-year-old woman in a flat at Block 70, Circuit Road, last month.

Boh Soon Ho, a Malaysian, is accused of killing Ms Zhang Huaxiang sometime between 12.54pm on March 21 and 8.40pm the next day.

Boh did not enter a plea to the capital charge, which was read out to him in Mandarin. He looked calm as he stood in the dock and looked around the public gallery at times.

The police prosecutor successfully applied for Boh to be remanded for further investigations.

District Judge Christopher Goh also granted permission for Boh to be taken out for investigations.

He will be brought back to court on April 14.

Boh arrived at the State Courts in an unmarked police car just before 9am. 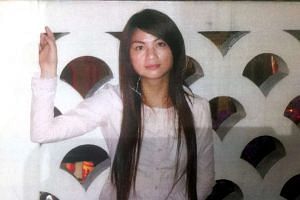 Ms Zhang Huaxiang, a nurse at the National University Hospital, was reportedly from Hunan, China, and was the suspect's girlfriend. Her parents collected her body on Saturday, after arriving here from China.

Boh was arrested by Malaysian police across the Causeway on Monday, and handed over to Singapore police the next day.

Ms Zhang was reported to have been found lying motionless in the rented bedroom of the third-floor flat by the landlord, who was at the unit to check on it as his tenant said he would be away on a business trip.

During his visit, the landlord had said he saw someone he thought was his tenant apparently asleep on the bed. The landlord then went out for dinner, but came back later to find that the person had not moved.

Pulling back the blanket, he realised it was actually the woman, who sometimes stayed over, and that she was dead.

Neighbours reportedly said they had not heard any commotion, and that the tenant had moved in last year and the woman was his girlfriend.

If found guilty of his charge of murder with intention, Boh faces the mandatory death penalty.