Search for 4 assailants; victim in hospital with serious injuries

A man is in hospital with serious injuries after he was slashed by four men in Serangoon Road yesterday afternoon.

The Straits Times understands that the attackers had a kitchen knife and a samurai sword when they confronted the victim at a bus stop in front of Broadway Hotel.

They fled in a rental car after the attack, leaving the man, believed to be a Singaporean, lying on the left-most lane of Serangoon Road.

As of 11pm last night, police were still looking for the assailants.

The victim was taken by the Singapore Civil Defence Force to Tan Tock Seng Hospital (TTSH) with injuries on the back of his head, arms and legs, ST understands.

A police spokesman said it received an alert at 2.21pm about a case of voluntarily causing grievous hurt with dangerous means at 202 Serangoon Road.

The spokesman added that the 27-year-old man was conscious when he was taken to TTSH and that police investigations were ongoing.

Ms Kwok Kar Peng, 41, a video producer, and her son had just got down from a bus when she saw the man lying in front of the vehicle.

"I thought it was a road accident at first," said Ms Kwok, who asked the victim if he needed help.

"He was not groaning or moaning or writhing in pain. But as I was giving the details to the police over the phone, I realised he was actually badly hurt, especially one of his soles, which was sliced very deeply. He was lying in a lot of blood." 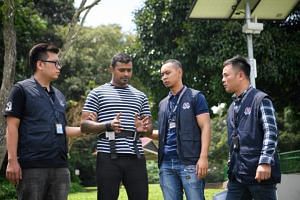 A passer-by took a first-aid kit to the scene and two people with medical knowledge assisted until an ambulance arrived.

"Later, when the police were at the scene, I noticed there was a knife at the bus stop," added Ms Kwok.

A bystander, a shopkeeper who gave her name only as Ms Gunasundari, 27, said: "I turned away for a moment to serve some customers and when I turned back, he was lying there.

"I didn't hear anything, no shouting or any noise."

She added that the area was cordoned off by the police and that buses had to stop a distance away from the bus stop to allow passengers to alight or board.