SINGAPORE - A man was sentenced to jail and fined on Thursday (March 15) after clashing with police officers during the 2015 Thaipusam procession. Two others were also fined over the same incident.

Businessman Ramachandra Chandramohan, 35, was sentenced to jail for a year and a week, and fined $8,000. He told the court that he will not be paying the fine. As a result, he will have to spend an additional three weeks and five days behind bars.

On Feb 3, 2015, the trio attended the annual Hindu event to enjoy some live music, but ended up getting into a scuffle with police instead.

Gunasegaran was at the Thaipusam procession to support his older brother, who was one of the bearers of kavadis - structures of steel and wood.

He and Ramachandra had engaged a troupe to play urumi - a traditional Indian drum - during the procession and were joined by Jaya Kumar.

But the musicians were stopped by the police as there was a ban on the playing of musical instruments during Thaipusam at the time.

This upset Ramachandra and Gunasegaran, who shouted at the police officers. 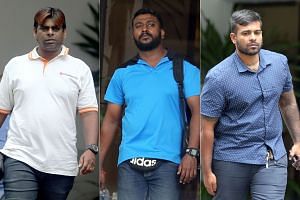 On Thursday, District Judge Kessler Soh noted that the men’s offences took place at a public event. He added that the incident was also widely reported by the media and had caused public disquiet.

Judge Soh said that the offences involved acts of defiance and abuse towards the police and that the trio had displayed contempt against the officers.

The judge told Ramachandra that his conduct was the most aggravated among the trio. He said: “You lost control of yourself... you assaulted three police officers that day.”

Following a 13-day trial, the three men were convicted on Feb 2 this year of disorderly behaviour and other charges.

Ramachandra was found guilty of seven charges, including assault on three police officers.

Jaya Kumar was convicted of three charges, and Gunasegaran two.

Following the 2015 Thaipusam procession, now-defunct sociopolitical site The Real Singapore (TRS) published an article that claimed complaints from a Filipino family over noise caused a scuffle between police officers and participants at the procession.

This did not happen. Police later arrested the duo behind TRS after a report was made against the website for inciting hatred against the Filipino community in Singapore.

For publishing the above and other seditious articles, the Australian editor of Japanese descent, Ai Takagi, was sentenced to 10 months’ jail. Her Singaporean husband Yang Kaiheng, who was co-founder of the site, received a sentence of  eight months’ jail.