SINGAPORE - It was not just one road rage incident, but on a total of three separate occasions, Muhammad Fuad Kamroden assaulted or used criminal force on other drivers after getting into a dispute with them.

In the most serious incident, the 35-year-old punched a lorry driver in the face, head and stomach, leaving the victim with facial fractures that required surgery.

Two other charges involving harassment will be taken into consideration during sentencing at a later date.

On Aug 12, 2016, Fuad and the lorry driver, Mr Pek Lian Hui, were in a carpark at the National University of Singapore at about 8.20pm.

Mr Pek, a 52-year-old contractor, was driving ahead of Fuad's car, looking for a vacant parking space.

Fuad felt that Mr Pek was driving too slowly and sounded his horn. He then overtook Mr Pek's lorry, pointed his middle finger as he passed the vehicle, and stopped his car in front of the lorry.

When Mr Pek alighted from his lorry and approached Fuad, a heated dispute ensued. Fuad then punched Mr Pek several times in the face, head and stomach.

He only stopped the assault after his mother and a passer-by intervened. 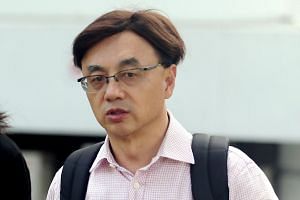 A medical report later showed that Mr Pek had suffered fractures on his face, and multiple facial abrasions as well as swelling and tenderness.

This voluntarily causing grievous hurt charge carries a jail term of up to 10 years, as well as a fine or caning.

While Fuad was on bail, he got involved in a second road rage incident.

On Dec 2, 2017, Fuad, who was working as a private-hire driver, side-swiped a taxi which was driving towards a pick-up point in Clarke Quay, along River Valley Road.

The taxi driver, Mohamed Iqbal Mohamed Shariff, 46, had been queueing to pick his passenger up from the taxi stand when a road marshal directed him to move his taxi to a pick-up point meant for private cars.

As the taxi was moving off, Fuad drove up from behind Mr Iqbal and the left side mirror of his car hit the taxi's right-side mirror.

When both drivers alighted from their vehicles, an argument broke out and Fuad pointed his middle finger at Mr Iqbal and pushed his left cheek, causing him to lose his balance.

Mr Iqbal suffered bruising on his face and was given three days of medical leave.

In the third road rage incident which occurred in February this year while he was still on bail, Fuad punched taxi driver Tio Seng Sing, 71, in the face after cutting in front of the older man's taxi.

Mr Tio had to hit his brakes hard to avoid an accident. The incident happened in Selegie Road towards Bukit Timah Road.

In May last year, Fuad also got into an argument with a man who had accidentally bumped into him while walking in the opposite direction at VivoCity. He behaved aggressively towards the man by pushing his shoulder, face and left elbow.

In his mitigation plea, Fuad's counsel said his client has been seeking help for anger management issues since last year, but added that "these things take some time".

Fuad is expected to be sentenced on Sept 4.