SINGAPORE - A part-time driver who was promised sexual services at a spa transferred $400 to a man posing as a masseuse's employer - only to find out later that he had been scammed.

But when he reached the spa, three women who were working there told him that there was no such person.

Still unhappy, Tay told his friend, cleaner Yeo Shuxing, to retrieve a penknife from his car.

A district court heard that Tay then threatened the women with the weapon and asked Yeo to remove the spa's closed circuit television (CCTV) camera.

Yeo, who did as he was told, pleaded guilty on Thursday (March 26) to one count each of theft, abetment of criminal intimidation and mischief.

The 37-year-old Singaporean was sentenced to four months and a week's jail.

Tay's case is still pending and court documents did not state the outcome of the sex scam.

On Sept 22 last year, Yeo befriended a woman called "Jasmine Poh" through communication app MiChat and was told that for $100, she would provide two hours of "massage" services at Cozy Spa.

He passed her contact to Tay, who decided to engage her services later that day.

Long Ge later contacted Tay and he transferred $100 to him. Long Ge contacted him again soon after to ask for "security payment" and Tay handed over another $300. 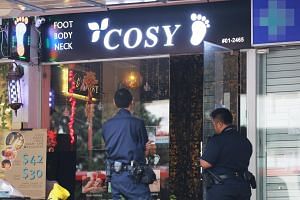 3 arrested for slashing 2 women with penknife, robbing them of 5 phones in Ang Mo Kio

Tay later realised that he had been duped when Long Ge asked for more money and Ms Poh did not turn up to meet him.

He went to Cozy Spa with Yeo the next day and confronted the three women who were working there.

After receiving the penknife from Yeo, Tay pointed the weapon at the trio and ordered them to call their boss, the court heard.

Deputy Public Prosecutor Zhou Yang said that Tay then got into a scuffle with two of the women when he tried to take their mobile phones.

The women suffered cuts on their arms and other parts.

The DPP added that before they left the spa, Yeo damaged the CCTV camera after Tay told him to remove it.

One of the spa's workers alerted the police soon after.

In an unrelated case, Yeo went to a supermarket at Block 631 Ang Mo Kio Avenue 4 last June and stole items worth nearly $10 in total including a $6.80 bottle of hair conditioner.

Offenders convicted of abetment of criminal intimidation can be jailed for up to two years and fined.