SINGAPORE - A man involved in "one of the most successful electronic bank heists" Singapore has seen, was on Thursday (Nov 21) acquitted of three money laundering charges by the High Court.

Ambrose Dionysius was cleared in the light of a recent Court of Appeal ruling regarding the anti-money laundering law he was charged with breaking.

He was charged with three counts under Section 47(1) of the Corruption, Drug Trafficking and Other Serious Crimes (Confiscation of Benefits) Act, or CDSA.

This provision, however, cannot apply to someone who launders the proceeds of another person's crime, the court ruled in a separate case in July.

The 62-year-old remains convicted of six other charges.

His overall sentence of five years' jail was not affected, as the terms for the three charges had been ordered to run concurrently with the others.

Dionysius was the sales director of a dormant Singapore firm, Hayashi Construction and Engineering, that received $4.4 million in stolen funds in 2013.

In July that year, employees at the RBC Royal Bank (Trinidad and Tobago) were duped into wiring a client's money, in two transactions, to Hayashi's bank account in Singapore.

The transfers were made after unidentified fraudsters sent e-mails to RBC from an Internet domain that was very similar to that of its client, the National Insurance Property Development Company (Nipdec).

Genuine e-mails from the client have the domain "nipdec.com", while the ones RBC received ended with "nipderc.com".

After receiving the first sum of $1.1 million, Dionysius withdrew $985,217 and passed this in cash to a Wendy Song in Malaysia.

A few days later, a second transfer of $3.3 million was made, but the Commercial Affairs Department moved in before this sum could be withdrawn.

Dionysius was charged with three counts of money laundering for moving the money from Singapore to Malaysia, four counts of receiving stolen property and two counts of failing to report moving more than $30,000 in cash out of Singapore. 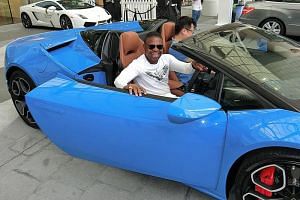 Jail for man linked to US$27.2 million fraud case

Banks, casinos commended for aiding police in seizure of $25m from financial crimes

He was found guilty and sentenced to five years' jail by a district court in November 2017. He appealed against the conviction and sentence.

At his appeal on Thursday, Deputy Public Prosecutor Leong Weng Tat conceded that the three money laundering charges "can no longer be sustained".

In July, the Court of Appeal ruled that someone who launders the proceeds of another person's crime cannot be charged under Section 47(1) of the CDSA.

In Yap's case, the apex court did not convict him under Section 47(2) because the prosecution failed to prove that a crime had been committed overseas.

The CDSA was amended in 2014, allowing prosecutors to produce a wider range of evidence to prove that a crime had been committed overseas.