A 25-year-old man appeared in court via video link yesterday over allegations that he had set fire to a Singapore national flag recently.

Elson Ong Yong Liang was charged with one count of mischief.

He is said to have used a lighter to set fire to the flag hung along a common corridor on the 13th storey of Block 774 Woodlands Crescent, between 6am and 6.15am on Sunday. It resulted in damage to seven other state flags that had been vertically tied together across seven floors.

Organisations and households can fly the national flag without a flagpole during the National Day celebrations, from July 1 to Sept 30.

In a statement on Wednesday, police said they were alerted to the incident at about 12.40pm on Sunday.

Woodlands Police Division officers identified the alleged perpetrator through inquiries and the use of closed-circuit television images before arresting him on Wednesday.

Ong is believed to be involved in similar cases in Woodlands. The Singaporean, who appeared before District Judge Terence Tay, was not offered bail and is now remanded at Woodlands Police Division.

His case has been adjourned to Aug 15. If convicted of mischief, he can be jailed for up to seven years and fined.

In an unrelated incident, Chua Chu Kang Town Council said it lodged a police report after China's national flag was displayed at a Housing Board block. 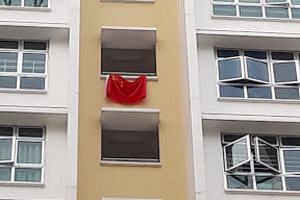 A town council spokesman said on Wednesday that the flag, which was displayed at Block 489B, Choa Chu Kang Avenue 5, has been taken down.

The National Emblems (Control of Display) Act states that displaying any flag or national emblem that is not that of Singapore in public is considered an offence.

When an emblem is visible to the public in any place where the public has right of way or has access, it is considered as being displayed in public. Those found flouting the rules could be jailed up to six months, fined up to $500 or both.