He walked into a second-hand watch shop wearing a fake Rolex, but allegedly snatched two real diamond-encrusted Rolex watches worth about $150,000 instead.

The man was supposed to be HJ Luxury's first customer of the day when he walked in around noon on Wednesday, said shopkeepers at the store in Far East Plaza.

He asked to view several Rolexes. But after the shopkeeper, who wanted to be known only as Ms Liew, presented some watches to him on a small tray, he purportedly snatched two of them and ran off while she was keeping some other timepieces.

"I thought something was fishy because the watches he was asking for were not suited for his age," said Ms Liew, 35. She and her older sister were the only two in the shop at the time. The store is owned by Mr Russell Tan, but he was not in at the time of the incident or when The Straits Times visited his shop.

Ms Liew immediately gave chase, but the alleged thief, whom she described as tall and in his early 20s, fled via a nearby staircase leading to the main road.

Shopkeepers from neighbouring stores joined in the chase, but they gave up after losing sight of him.

While he escaped, the multiple closed-circuit TV (CCTV) cameras in the shop managed to capture his image, said Ms Liew. 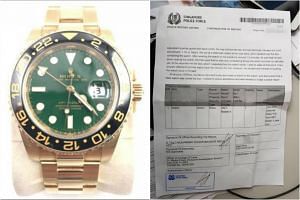 Two accused of stealing Rolex after sleight of hand

The alleged thief also left his fingerprints on multiple glass surfaces in the shop, she added, noting that he left behind his fake Rolex and an empty bag. The police took both items as evidence, she said.

Ms Liew said she and the other storekeepers have discussed installing a glass door at the store entrance to prevent people from running off with their goods.

"We are all operating small shops here, we can't afford to hire a security guard for every shop," she said.

The incident has rattled the confidence of shopkeepers in neighbouring stores.

A store owner who wanted to be known only as Mr Wong, 50, and whose watch store is just two shops away from HJ Luxury, said he will lock the door behind every new customer who walks in from now on.

Over at Lynn Jewellery and Watches, shop owner Linda Lim said her son was so spooked by the incident that he immediately bought CCTV cameras for her to install the next day.

Other shop owners are relying on their gut instincts to suss out those who are up to no good.

A shopkeeper, who wanted to be known only as Mr Goh, 62, said he will try to be more careful to detect any hint of wrongdoings in his shop, Goldman Luxury, which also sells second-hand watches.

"We must take out the watches to show the customers, if not, it's very hard to sell them... business must carry on," said Mr Goh.

The police have released an image of the alleged thief and are appealing for more information.

Anyone with information on this case can call the police hotline on 1800-255-0000, or submit information online at http://www.police.gov.sg/iwitness