SINGAPORE - A man pummelled his sister's domestic helper after their mother accused the Filipina of being "disrespectful" by lying with her feet close to the older woman's head.

Benjamin later assaulted his brother-in-law, who returned home to the Jurong West flat later that evening but did not shake Benjamin's hand. Benjamin was unhappy and accused Mr Muhammad Irfan Zakariah, 31, of being rude.

Benjamin, 33, pleaded guilty in court on Friday (Oct 11) to two counts of assault.

The maid had to do household chores and also take care of the siblings' mother, Madam Muriah Arshad, 63.

Around 7.30pm on Nov 21 last year, Ms Cabelte was lying in the living room with her feet close to Madam Muriah's head, the court heard.

The DPP said: "Muriah was displeased about this and complained to the accused, who was in his room, that Jeizel was disrespectful to her.

"At that time, the accused was playing a game on his handphone and lost the game. The accused became very angry and, together with Muriah, went to the living room to confront Jeizel."

Benjamin started punching and kicking Ms Cabelte, causing his mother to intervene by shielding the maid with her body.

Madam Muriah managed to stop her son and Ms Cabelte then locked herself inside a room in the flat. 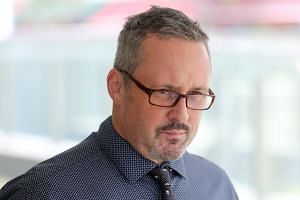 Jail for private-hire car driver who assaulted man, causing him to lose teeth

Madam Muriah called Madam Dewi to tell her about the incident, and Madam Dewi went home with her husband around 8pm.

DPP Ong told District Judge Ng Cheng Thiam that Benjamin accused Mr Irfan of being rude and not shaking his hand. He then punched Mr Irfan near his lips twice, and also head-butted him, causing him bodily pain and his lips to bleed.

Madam Dewi alerted the police and officers arrived soon after to arrest Benjamin.

Ms Cabelte went to Ng Teng Fong General Hospital the next day and was found with injuries including a bruised forehead. She is no longer living at the flat.