SINGAPORE - A Malaysian actor who was found with a packet of cannabis mixture at the Tuas checkpoint in March this year was jailed for eight months on Thursday (April 21).

Tony Eusoff, whose real name is Anthony Joseph Hermas Rajiman, pleaded guilty to having a packet with no less than 4.56g of the drug at the Immigration and Checkpoints Authority (ICA) bus arrival hall at the Tuas checkpoint on March 12.

The court heard that the 39-year-old had entered Singapore on a social visit pass for a filming assignment. He brought the packet of cannabis mixture here for his own use.

Before his coach arrived at the Tuas checkpoint, he removed the packet of weed from his luggage and placed it behind the last row of seats on the upper deck of the coach.

He intended to retrieve it after clearing immigration.

An ICA officer who was checking the coach found the packet of weed. The Central Narcotics Bureau (CNB) was later informed about the case.

A CNB officer interviewed passengers but none of them admitted to owning the packet.

Tony was then taken to the CNB office at the checkpoint for investigations. He admitted to owning the recovered packet of weed and said it was for his own consumption. 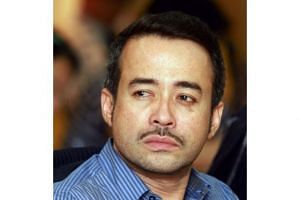 In court on Thursday, there were 10 supporters who turned up for the Sarawakian actor's case. They included Wild Rice artistic director Ivan Heng, actor Lim Kay Siu and his wife, Neo Swee Lin, as well as investment banker and chief executive of TC Capital, Dr Tommy Tan.

In Tony's mitigation plea, his lawyer Abraham Vergis highlighted the actor's significant achievements to the arts scene on both sides of the Causeway, calling him a cultural asset.

He said his client showed true contrition and remorse. His momentary lack of judgment was precipitated by stress, the relentless demands of his professional life, and an all-invasive loss of privacy, he said.

Tiara Jacquelina, president and group chief executive officer of Enfiniti Vision Media, wrote that Tony was a "steady, disciplined and dependable actor", and "has a very bright future ahead of him... and is considered one of the local arts industry's most valuable assets".

The chairman of Bloomberg TV Malaysia also wrote that he is "renowned for his discipline, reliability, hard work, and as a person of high integrity".

Mr Vergis said his client is determined to turn his life around when he gets released.

"He is looking forward to using his story as a learning point for others to not try or associate oneself with drugs," he said.