SINGAPORE - Ex-cop Iskandar Rahmat revealed in court on Friday (Oct 30) how he had planned to rob car workshop owner Tan Boon Sin of more than $200,000, and that he was acting in self-defence when he stabbed Mr Tan and his son.

Iskandar, 36, was one of two witnesses to take the stand in front of a packed courtroom of about 50 people on the sixth day of the high-profile trial.

The former policeman is accused of stabbing and slashing Mr Tan, 67, and his son Tan Chee Heong, 42, at their Hillside Drive terrace house on July 10, 2013, while attempting to carry out the robbery.

Faced with debts incurred from his car, housing and renovation loans, Iskandar said he had been "desperate" as he feared that he could not provide for his family.

He had been assigned as the investigating officer when the elder Mr Tan first made a police report that money was missing from his safe deposit box at the Certis Cisco Centre. But as several other thefts were also reported, another officer was assigned to look after all the cases.

The idea of taking the money came when he learnt from his colleague that Mr Tan still had more than $200,000 in the box. 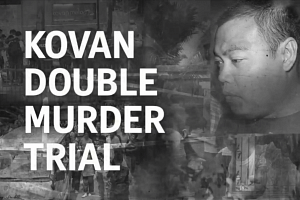 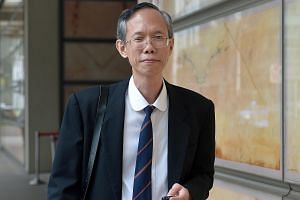 With the July 11 deadline of his disciplinary hearing for financial embarrassment nearing, Iskandar came up with a plan on July 8 - he would tell Mr Tan his safe deposit box would be hit again, and that he needed to put a surveillance camera inside.

When Mr Tan took out the money from the box, he would then strike.

While attempting to install the camera in the house, Iskandar's ploy was discovered when Mr Tan realised there were no batteries in it.

Iskandar claimed Mr Tan had approached him while holding a knife in his right hand, and had attempted to attack him.

He then grabbed Mr Tan's knife-wielding hand and got injured in the process. He eventually wrestled the knife from Mr Tan and stabbed him in the ensuing struggle.

After Mr Tan had weakened, his son Chee Heong got home, saw what had happened, and rushed at Iskandar with his fists clenched.

Without realising that he was still holding the knife, Iskandar aimed punches at Chee Heong's face, who fell down during the scuffle as the floor was slippery with blood and subsequently ran out of the house.

Iskandar then retrieved Mr Tan's car keys next to his body. He claimed he did not go to the back of the car and was not aware that Chee Heong was behind it as he drove off. He also did not feel any difference with the car when Chee Heong's body got dislodged near Kovan MRT station.

The past five days of the trial saw 16 prosecution witnesses out of the list of 102 take the stand.

The statements of the other 85 witnesses were admitted without them being called to the stand, as the defence did not dispute their testimonies.

Cross-examination of the witnesses will begin on Nov 9.