If you were to ask retired police officer Davy Chan whether hired killers can be found on the Dark Web, he would be the first to dismiss such talk.

The Police Gallantry Medal winner, who traded gunfire with criminals in the 1970s, said assassins had existed in the "cowboy" days.

He recalled investigating a case in the early 1970s when a hitman was employed to deal with an illegal 4-D operator who had refused to pay the full $60,000 prize to a winner.

The gunman, hired by the winner through his contacts, visited the 4-D operator at his village home in Jalan Lam Sam to warn him to pay up. "The table talk was unsuccessful," said Mr Chan.

"The 4-D operator later taunted the winner by saying he should have sent somebody with more 'weight' to come to his home," he added.

Angered, the gunman returned and fired his Smith and Wesson revolver - but all five rounds missed their target who escaped into a nearby plantation. 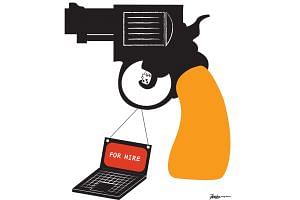 Unravelling the Dark Web: Hacks into hitman sites led to arrest of Singaporean

Several months later, the gunman was cornered in Pasir Panjang where he was killed after a shootout with police, Mr Chan said.

This time, the assassins' bullets did not miss their mark.

Mr Degioanni was killed in his black pick-up outside his Patong Beach condominium in Phuket after two hitmen on a motorcycle had ambushed him.

The perpetrators were later arrested, including Goh, who is serving a life sentence in Thailand.