SINGAPORE - The boss of a now-defunct electronics firm was jailed 33 months on Monday (Nov 30) for cheating his customers.

Jover Chew Chiew Loon, 33, was also fined $2,000 for a charge of insulting behaviour.

Chew, the "brains and architect" behind Mobile Air, had earlier pleaded guilty to 12 of 28 charges - including abetment by conspiracy to cheat and criminal intimidation.

The prosecution had called for a three-year jail sentence for Chew.

On one occasion, when ordered by a Small Claims Tribunal to reimburse a customer $1,010, Chew gave her a bag containing $547 of the sum in coins, and filmed her aunt picking up the coins when they fell to the floor of his shop. 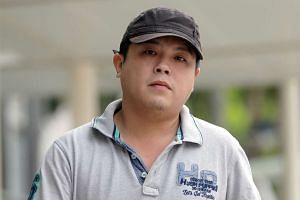 Jover Chew pleads guilty to 12 charges, to be sentenced on Nov 30

Chew's salesman Kam Kok Keong, 31, made her sign the invoice and other documents after she had paid $1,600.

She was then told she had to pay $2,376 extra, plus $99 a month for a two-year warranty. When she said she did not want to buy the phone, Kam said he would refund her only $600 and she had to "compensate Mobile Air $872 for breach of contract".

She called the police, who advised her to lodge a complaint with the Consumers Association of Singapore. She left with the phone after paying a further $1,400. She extended her stay here to seek recourse. 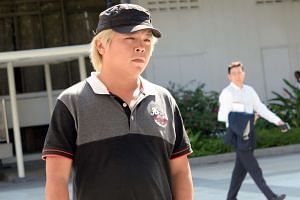 From The Straits Times Archives: The Jover Chew saga

The tribunal ordered that she be refunded $1,010. She and her aunt returned to Mobile Air a month later, on Oct 28, to collect the money.

Chew went to the rear of the shop, then handed Ms Zou a big bag of coins, asking her to check if the amount was correct.

"Ms Liu remarked that the accused was not sincere in returning the money and accidentally dropped the bag of coins on the floor,'' said DPP Lim.

Chew told Ms Zou to pick up the coins, then filmed Ms Liu doing so, saying he wanted to be sure that she was counting the money.

Kam and three others are now serving four to 14 months for their role in the scam.

In another incident, a Vietnamese tourist had begged, knelt and cried after Chew and his staff overcharged him for an iPhone 6.