SINGAPORE - A Singapore permanent resident who fell on hard times after losing his job was afraid that his Filipino wife's long-term visit pass (LTVP) would not be extended when he could not sponsor her continued stay here.

As he did not want his wife to worry, Briton David Andrew Hygate decided to forge various e-mails purportedly sent by the Visitor Services Centre of the Immigration and Checkpoints Authority (ICA) to his personal e-mail account.

He then forwarded these e-mails to his wife, Mrs Marilou Cambo Hygate, 39, to dupe her into believing that her LTVP had been extended by ICA.

Besides these, Hygate also forged e-mails purportedly sent by Drew and Napier law firm to buttress the deception so that she would not question him about the status of her pass.

Former pharmacologist Hygate, 51, was sentenced on Friday (Sept 13) to 14 weeks' jail and a fine of $2,000 after he pleaded guilty to one count of abetting his wife's overstaying. The fine was imposed for he cannot be caned as he is over 50 years old. He was also fined an additional $6,000 after admitting to two forgery charges.

Another six forgery charges and one count of knowingly harbouring an immigration offender were considered during sentencing.

The court heard that Mrs Hygate has already served her 16-week sentence after unlawfully remaining in Singapore for nearly three years - from Sept 27, 2015, to Aug 20 last year. She is now back in the Philippines.

Court documents did not reveal when or where he married his wife, but the couple relocated to Singapore in February 2014. He then applied for her LTVP and was aware that it would expire in September 2015.

However, Hygate later became unemployed and forged the e-mails as he did not want his wife to worry.

The offences came to light on Aug 20 last year when ICA officers conducted a check at the couple's home and Mrs Hygate produced her passport for verification. Officers then found out that her LTVP had expired on Sept 26, 2015.

The DPP told District Judge John Ng: "According to ICA's records, there were no further extensions or applications made to renew Marilou's LTVP after its expiry. As such, Marilou was established to be an immigration offender. Consequently, both the accused and Marilou were referred to the ICA Enforcement Division for further investigations." 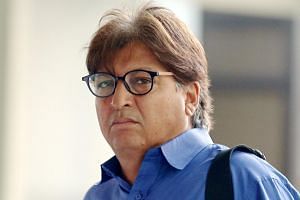 Officers later found the forged e-mails, purportedly from ICA, on her mobile phone.

Hygate, who was unrepresented, told Judge Ng on Friday that he committed the offences out of desperation as he did not want to be away from his wife.

He added that he had acted "out of character" when he sent the "stupid e-mails". Hygate also said he intends to cancel his permanent residency and leave the country to be with his family.

For each count of forgery, he could have been jailed for up to four years and fined.