SINGAPORE - The Inland Revenue Authority of Singapore (Iras) issued an advisory on its Facebook page and website on Tuesday (Aug 20), alerting the public to a tax refund scam circulating on WhatsApp.

The public was advised to avoid responding or circulating the scam e-mail image with the header "Inland Revenue Authority of Singapore-Refund-Online-Confirmation".

The scam e-mail included the taxman's official logo and instructed the receiver to download and complete a tax refund form from a link provided, before submitting it.

The receivers were falsely informed that they would receive a tax refund of $236.51, Iras said.

The scam e-mail added that the refund could be delayed due to various reasons, including submission of invalid records or submission of the request after a deadline.

Iras said the public should "be wary online, especially during this period when tax bills are being sent out in batches".

It added that its official e-mails are not sent out from personal e-mail accounts such as Hotmail or Gmail. 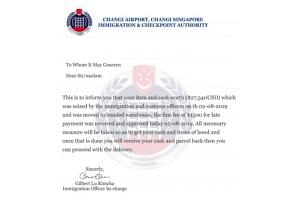 Iras warns against scammers impersonating its officers, as it moves towards increased digitisation

It also said that it does not ask the public for confidential personal details on the phone or instruct them to make payment to a third-party bank account.

It cautioned the public to verify sources of information carefully in order to identify fake news and prevent the spread of false information through messaging applications.

Several scams impersonating the taxman have been reported in August, including another e-mail scam containing fake tax invoices, which instructed receivers to make payments.