A businesswoman from China who invested $30.7 million in a chain of aesthetic clinics here has sued its founder and his daughter for misrepresentation and breach of contract, in a case that opened in the High Court yesterday.

Madam Wang, 50, who is a non-executive director of Chinese skincare company Marubi, eventually paid a total of $30.7 million for 66,000 shares.

Represented by a team from Drew & Napier led by Senior Counsel Jimmy Yim, she is seeking a full refund of her investment.

Yesterday, in presenting her case, Mr Mahesh Rai told the court how, on Oct 15, 2013, Dr Goh had wooed Madam Wang by inviting her on board his million-dollar yacht in Sentosa Cove.

"Dr Goh was very keen to sell Madam Wang a picture of success and profitability," he said. 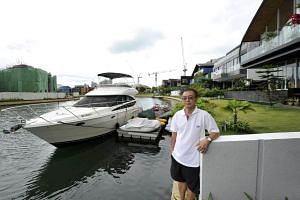 At this meeting, Dr Goh allegedly told Madam Wang that AMP made a pre-tax profit of $10 million in 2012, and its pre-tax profit was growing at a rate of more than 30 per cent a year.

She claimed Dr Goh also told her he had previously sold his shares in the firm to others at $600 to $700 each, but he was willing to give her a discounted price of $500.

The court heard that prior to the agreement with Madam Wang, Dr Goh had not sold his shares at $600 to $700 each.

Madam Wang asserted that Dr Goh, 62, made further false claims to mislead her into signing the second contract.

She also alleged that he suggested she buy out a group of minority shareholders, who were willing to sell their shares only at $450 each. This was done in a back-to-back arrangement, in which Dr Goh bought the shares from the minority shareholders and sold them to Madam Wang.

She said Dr Goh also promised not to sell any more of his shares without her permission.

Madam Wang said she did not pay for the last tranche of 4,000 shares when she found out in January 2015 that Dr Goh was selling his shares to a third party, Liberty Sky Investments (LSI).

She accused him of profiteering from the second contract by selling the shares to her at $450 when he had in fact bought them at $350.

She also accused Dr Goh and his daughter Michelle, 32, who is also a medical doctor and the former chief executive of AMP, of breach of contract for resigning from AMP. Dr Goh had resigned from AMP on Feb 2, 2016, and Michelle on June 30, 2015.

Dr Goh has counter-sued Madam Wang, alleging that she was in breach of contract by not buying the remaining 4,000 shares as agreed. He is seeking damages to be assessed by the court, said his lawyer, Senior Counsel Lok Vi Ming of LVM Law Chambers.

Dr Goh contended that he did not mislead Madam Wang into signing the contracts. He said he had no reason to do so, when his offer price was justifiable.

He said he was looking for a long-term joint-venture partner to make inroads in the China market and it made no sense for him to pull a fast one on Madam Wang.

He also denied having told her that the minority shareholders were willing to sell only at $450.

Separately, the Gohs have been sued by LSI and AMP.

The chain, which originally had 14 branches, is facing insolvency, it emerged yesterday.