Law Minister K. Shanmugam hopes an international insolvency federation that has based its first overseas office here will find Singapore an ideal centre for growing its membership and stakeholder engagement.

The office - the Insol International Asia Hub - will also look into training and education, and help develop insolvency and restructuring systems.

"These are all objectives that Singapore shares, supports and we will be happy to partner Insol... across the region," said Mr Shanmugam, who is also Home Affairs Minister.

Insol's new office joins that of over 160 international organisations in Singapore, including the World Bank Group and Interpol, as well as 4,200 or so regional headquarters of multinationals.

This is the largest concentration of regional headquarters in the Asian region, Mr Shanmugam said at Insol's launch event at Maxwell Chambers Suites yesterday.

He added that Asia is expected to see "tremendous growth in the coming decades, in infrastructure development, trade flows and business flows", and this will lead to a rise in the need for restructuring.

He noted that in spite of trade tensions between the United States and China, the general trend in the region remains an upward one.

"Our goal is simple: to be the leading Asian centre for debt restructuring," he said. "We want to be one of the leading centres around the world, alongside London and New York." 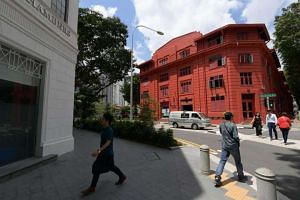 Dispute resolution complex in Maxwell to open on Aug 8

Ms Julie Hertzberg, president of Insol International, said "an endeavour of this nature is a monumental step for Insol". It is the first time in Insol's 37-year history that it has increased its footprint with a physical expansion outside Britain.

"The official opening of the Insol Asia Hub... is further testament to our commitment and our determination to broaden and deepen our engagement in the region," said Ms Hertzberg.

Insol International has more than 40 member associations with over 10,500 members.

The launch of Insol's Asian arm comes just two days before the Singapore Convention on Mediation, the first United Nations treaty to be named after Singapore, opens for signature. It is among events to commemorate the convention. The treaty will make it easier to enforce mediation settlements across borders. The US and China are set to be among the first countries to sign it.

Other events include the grand opening of Maxwell Chambers Suites, where Insol's Asia Hub is housed.