SINGAPORE - Immigration officers made a startling find when a Malaysian-registered tour bus tried to import prohibited items of different natures at Woodlands Checkpoint on Monday (Feb 26).

The bus, which was driven by a 30-year-old man, contained 4,500 sachets of chewing tobacco and 121 live birds in separate luggage compartments, said the Immigration and Checkpoints Authority (ICA) on Wednesday.

The chewing tobacco were found in three black bundles in red plastic bags, while the birds were separated into 10 boxes with holes.

The man, live birds and the bus were handed over to the Agri-Food and Veterinary Authority of Singapore for investigations, while the sachets of chewing tobacco were seized and referred to the Health Sciences Authority for investigation.

The man was charged in court on Wednesday.

Under Cites, permits are required for the import, export and re-export of species under the convention, including their parts and products.

Under the Endangered Species (Import and Export) Act, offenders can be fined up to $50,000 per scheduled species (not exceeding a total of $500,000), and/or imprisonment of up to two years. 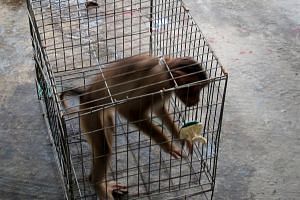 The import of animals and birds without a licence is also an offence under the Animals and Birds Act, which offenders can be fined up to $10,000 or jailed for up to 12 months, or both.

If convicted, any person who causes unnecessary pain or suffering to animals may be fined up to $15,000 or jailed up to 18 months, or both.

The ICA said it will continue to conduct security checks on passengers and vehicles at checkpoints to prevent attempts to smuggle in undesirable persons, drugs, weapons, explosives and other contrabands.

It added: "The same methods of concealment used by contraband smugglers may be used by terrorists to smuggle arms and explosives to carry out attacks in Singapore."