SINGAPORE - After getting into trouble with the police, a former account and administrative assistant with Hougang United Football Club misappropriated nearly $300,000 in cash from the club's safes.

She transferred the money to a man who had promised her that he could help her resolve the police case.

As an assistant at the club, Tean's duties included keeping an account of the money kept in the safes in its office at Block 247, Hougang Avenue 3, and its clubhouse at 100 Hougang Avenue 2. She was also responsible for issuing the cash floats for the club's jackpot machines.

She had access to the keys for both safes, which contained the club's sales revenue and earnings before the cash was deposited into its bank account.

On Oct 6 last year, Tean received a friend request over Facebook from a Lily Tan and accepted the request. Subsequently, the person asked Tean if she was interested in a part-time job, which involved the use of Tean's bank account for transactions on the person's behalf. In return, Tean would earn a commission of 5 per cent from each transaction.

Tean agreed to the job and gave her bank account details to both Lily Tan and the latter's colleague, known only as Steven in court documents.

Nearly a week later, she began receiving money in her bank accounts and each time, she would transfer it to Steven as soon as possible. 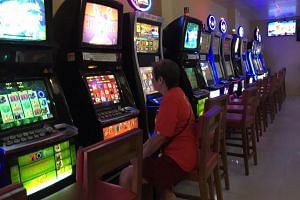 The next month, Tean's bank accounts were frozen and when she contacted the police, they told her that the transactions involving Lily Tan and Steven were being investigated by the authorities.

When she informed Steven about it, he told Tean to give a false account that she had taken loans from an unlicensed moneylender, and had allowed the moneylender to use her bank accounts to make transactions in lieu of loan repayments.

On Nov 26, Tean gave the false account to the police. She was arrested and her passport impounded.

When she was out on bail, she updated Steven on the status of the case. He told her that he could help her resolve the matter for a fee of $100,000, an amount that was eventually lowered to $30,000.

As her actions were undetected, Tean became emboldened and continued taking money from the safe on an almost daily basis in increasing amounts until December last year, said Deputy Public Prosecutor Tan Yanying.

That month, Tean began taking money from the club's second safe, which was located at the clubhouse.

Each time she took the cash from the safes, Tean would deposit it into bank accounts that were provided by Steven.

The misappropriation was later discovered by Ms Yap on Dec 15 last year, after she realised there was a shortfall of $278,000 in the two safes.

To date, Tean, who has been remanded since Dec 17 last year, has not made any restitution to the Hougang United Football Club.