A 40-year-old man was fined $600 yesterday for riding an e-scooter 6cm wider than the prescribed 70cm limit on a public path.

Loh Izel Feizal, who is currently behind bars for drug-related offences, has become the first person in Singapore to be convicted in court over his usage of a non-compliant personal mobility device (PMD).

The court heard that he rode the e-scooter along Mountbatten Road at around 7pm on May 15 last year.

Land Transport Authority (LTA) prosecutor Daniel Marini said the agency takes a serious view of non-compliant PMDs used on public paths. He told the court that the requirements on the weight, width or speed of PMDs were imposed to protect the public, as well as to minimise the potential harm and the likelihood of accidents occurring.

He added: "There is an ever-increasing prevalence of incidents involving PMDs and there is a need for general deterrence. It was reported that about 1,700 active mobility offences were detected in the first half of 2019, of which about 30 per cent... were related to riders using non-compliant devices."

The Straits Times reported on July 2 that over 85,000 e-scooters were registered with the LTA before the deadline to do so ended on June 30.

In an earlier statement, the LTA said that almost 1,000 registrations were recorded on the last day. 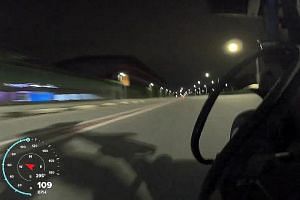 Five days later, The Sunday Times stated that the number of reported accidents involving PMDs on public paths has increased. There were 228 such cases in 2017 and last year. Of these, 196 sustained injuries and one rider died after his PMD skidded.

With the passing of the June 30 deadline, it is now illegal for PMD users to ride, cause or allow another person to ride an unregistered e-scooter on public paths.

Registration for e-scooters opened on Jan 2 to deter reckless riding and to facilitate enforcement efforts against errant riders. Those registering must be at least 16 years old and declare that their e-scooters do not exceed 20kg in weight and 70cm in maximum width. The maximum motorised device speed should also be capped at 25kmh.

On Monday, 48-year-old Aidel Ja'apar was fined $700 after becoming the first person here to be convicted of riding a non-compliant power-assisted bicycle under the Active Mobility Act.