SINGAPORE - A local stable has lost its appeal to overturn a conviction of animal cruelty towards one of its horses.

Gallop Stable, which manages around 150 horses and ponies across two stables, was found guilty and fined $9,000 last year for cruelty towards a 17-year-old chestnut thoroughbred mare named Sharpy.

The court found it failed to provide adequate veterinary attention to the mare, causing it unnecessary suffering.

Sharpy was found with severe inflammation and infection in its right hind leg with evidence of necrosis (death of the body's cells) and a swollen left hind leg during an unscheduled inspection on May 15, 2013, by Dr Wendy Toh from the Agri-Food and Veterinary Authority (AVA).

Flies were also feeding on Sharpy's wound and the mare was suffering from cellulitis, a serious bacterial infection with a high mortality rate in horses.

The defence maintained on Friday (April 20) that Gallop Stable staff medicated Sharpy before May 15 as they believed it was having a relapse of a pre-existing condition called lymphangitis, which can cause swelling in the legs.

This would not have required a vet, according to stable staff. 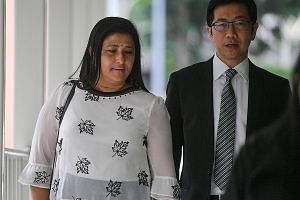 But the prosecution argued that according to all expert witnesses, Sharpy would have experienced symptoms such as lameness, pain and fever for several days before its wound developed necrosis. That meant Gallop Stable should have sought veterinary attention before May 15.

A key point of contention during the appeal hearing was when Sharpy's wound became visible, which would indicate that it required urgent veterinary care.

While both sides were unable to conclude exactly when the cellulitis would have manifested itself as an open wound, it was noted that stable employee Maneesha Shanker, who tended to the horse, noticed a "bubbly appearance" and "skin peeling" on Sharpy's leg before May 15.

Justice Chan Seng Onn dismissed the appeal and stuck with the original conviction and sentence of a $9,000 fine handed down by the State Court in May last year.

Gallop Stable spent $16,000 treating Sharpy, who has since recovered and is still housed at the stable.

This is not the first time the firm has been mired in controversy. In 2015, 73-year-old Madam Lim Ah Boey died after being pinned under a 450kg horse following a ride at the stable's now-closed Punggol branch. The death was ruled as misadventure.