Four hotels that colluded by sharing with one another the non-public room rates offered to companies have been fined more than $1.5 million in total for infringing the Competition Act.

The Village hotels, which are both managed by Far East Hospitality Management Pte Ltd, were fined $286,610, while Crowne Plaza received a fine of $225,293.

The information shared across the four hotels included the percentage discount that corporate customers asked for during confidential negotiations, and the responses of the hotels' sales representatives.

The commission provided extracts of four WhatsApp conversations between the sales representatives at its media briefing, which it had obtained during its investigation that culminated in a raid on June 30, 2015.

Sales representatives of Capri and the two Village hotels exchanged information between July 3, 2014 and June 30, 2015. 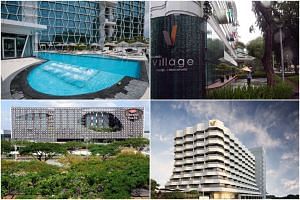 The watchdog said the two Village hotels and Crowne Plaza applied for leniency treatment and received lighter penalties, which are granted when businesses provide information on their cartel services. Capri did not apply for leniency, CCCS added.

"The exchange of non-public commercially sensitive information between competitors is harmful to competition and customers in the market as it reduces the competitive pressures faced by competitors in determining their commercial decisions, including the price they will offer to customers," said the commission's chief executive Toh Han Li.

"If a business receives such information from its competitor, it should immediately and clearly distance itself from such conduct and report it to CCCS."

Mr Toh added that this was the second such case CCCS has handled where competitors shared commercially sensitive information, which is distinct from cases involving price-rigging behaviour.

In the other case, two ferry operators serving the Singapore-Batam route were in July 2012 fined $172,906 and $113,860 respectively for infringing the Competition Act.

Responding to queries from The Straits Times, Far East Hospitality chief executive officer Arthur Kiong said: "Although disappointed with the infringement decision, the Group respects the position taken by CCCS.

"We have and continue to take various steps to review and implement rigorous compliance and training programmes to ensure that our business practices are and continue to be fully compliant with all applicable laws."