The facilities management company is a subsidiary of United Engineers (UEL). Lee was terminated from her job in June 2015.

Lee, now 39, made personal gains totalling more than $5 million. She used some of the proceeds of her criminal activities to buy items such as multiple properties, luxury goods and a car.

On Friday, the court heard that only about $2.1 million could potentially be recovered.

Part of this amount is the $900,000 which was recovered by the Corrupt Practices Investigation Bureau's seizure and recovery efforts. 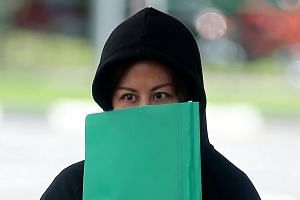 Deputy Public Prosecutor Jasmin Kaur told District Judge Tan Jen Tse that the amount which could potentially be recovered from the local properties Lee bought is about $1.2 million.

She added that the lawyers from Lee's former company are still in negotiations with banks and developers on the final amount.

Before handing out the sentence, Judge Tan said that Lee should receive a "severe sentence", as her offences were serious and the amount involved was large.

On Aug 31, Lee pleaded guilty to 28 cheating charges and seven counts of converting the proceeds of her criminal activities by buying the big-ticket items.

Another 325 charges for similar offences were taken into consideration during sentencing.

Lee committed the offences between 2010 and 2015. According to court documents, she worked with four accomplices, whose cases are still pending.

Among her offences, Lee set up LT Engineering Consultancy in 2011 under the name of her unsuspecting father, Mr Lee Foo Wah.

She explained to him that the firm would be doing general works, when, in fact, her sole purpose for creating it was to siphon money from UEL.

She also used false quotations to get UEL to pay for her own home renovations.

Lee, who had engaged the firm Pure Concept to work on her flat, created fictitious jobs in UEL's system, stating that work needed to be done at UE Square, which was developed by UEL.

By doing so, she caused UEL to make payment to Pure Concept on a total of 63 occasions, and the total amount it gave the renovation company was $220,000.

She also created fictitious jobs and submitted false quotations which were rigged for the jobs to be awarded to a construction firm known as Ying Xin Services.

After payment was made to Ying Xin Services, Tan Aik Gee, a manager with the firm and one of Lee's alleged accomplices, would keep half for himself and give the remainder to Lee.

She also used a similar method for jobs to be awarded to companies set up by another accomplice.

Offenders convicted of cheating can be jailed for up to 10 years and fined for each charge.